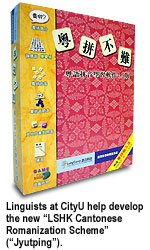 The scheme is a collaboration between linguists from CityU, the Linguistic Society of Hong Kong, and four other universities in . The system is now adopted by the Office of the Government Chief Information Officer.This project exemplifies CityU’s achievements in providing quality applied research and making valuable contributions to society. 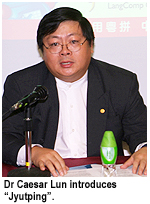 “Pinyin lays the foundation for mother-tongue education, and we cannot ignore its important role in making accurate pronunciation, searching for information, and Chinese word processing,” said Dr Caesar Lun, Assistant Professor in CTL. He is also President of the Linguistic Society of Hong Kong.

Although Cantonese is the mainstream dialect in Hong Kong, the “Hongkong-ish” pinyin is not accurate and systematic enough for students to understand the phonetic system of Cantonese, Dr Lun said. He added that the students are so confused that they cannot read or pronounce accurately and therefore their language learning may be slowed down. 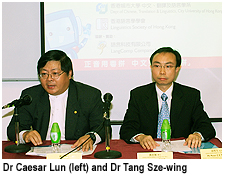 “Jyutping” is a Cantonese Romanization scheme (using dialects of and ). It uses the Latin alphabet (from A to Z) to transcribe Cantonese pronunciation and uses Arabic Numerals (1 to 6) to indicate tones. Dr Lun said at the press conference that “Jyutping” is theoretically sound for academics and has wide applications in information technology such as computer input, Cantonese information exchange, and computer software for learning accurate Cantonese pronunciation. This scheme is also suitable for Cantonese transcription, word searching and speech therapy.

Other speakers included Dr Jonathan Webster, Head of CTL, and Dr Tang Sze-wing, Convener of the Cantonese Romanization Promotion Working Group. Dr Tang introduced the role of “Jyutping” in language education and discussed its functionality from a scientific angle and ways to minimize inaccurate pronunciation. 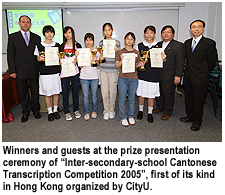 In order to promote "Jyutping" and the underlying message concerning more accurate Cantonese pronunciation, and to encourage the use of the Scheme in areas of information technology, CTL collaborated with the Linguistics Society of Hong Kong and LangComp Company Limited to organize the “Inter-secondary-school Cantonese Transcription Competition 2005”. The Competition was divided into Junior Group and Senior Group. The teams first attended a workshop at CityU to understand “Jyutping”, and then entered the competition. Three participants from each group were chosen to compete for the Champion in the Final Round. The results (please refer to the attached) were announced, followed by an award presentation.