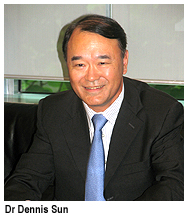 Dr Dennis Sun, Chairman of the Community Relations Committee under City University of Hong Kong’s Council, unveils the university’s campus development plan for the next 10 years. He also appeals to the community for support of the University’s teaching and learning initiatives and development.

Sir Gordon Wu, Council Chairman of CityU, has pledged his support of the University’s campus development plan and educational projects.

It is an exciting era for CityU as it enters a rapid growth phase in the next 10 years. The University requires additional space to ease its overcrowded campus and cater for an increasing student population due to the planned four-year undergraduate curriculum and expanding self-financed programmes.

Dr Sun said he hoped the public would give CityU, a caring and upward-moving university, full support. “CityU colleagues are working very hard to make things work,” he said. 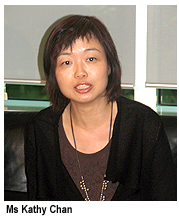 To make the University’s fund-raising exercise more successful, Ms Kathy Chan, Director of Development and Alumni Relations Office, called for small but regular donations from CityU friends, alumni, staff and students. She also emphasized that the University aims at developing long-term relationship with donors. “We will continue to launch more fund-raising activities, not only to raise funds for the University’s development, but also to cultivate a stronger sense of belonging within the CityU community,” she said.

Cornwall Street
in Kowloon Tong, an academic-administrative building for the four-year undergraduate curriculum ($530 million) and the Building ($600 million). The last two projects will be built on campus.

The University is seeking UGC approval to construct a building to ease an overcrowded situation. The University plans to submit to UGC in early October a proposal to request $300 million for this project (tentatively called the short-fall building). If donations are received, this project can be expanded to provide more space.

When these projects are completed, CityU’s usable net area will increase 65% to 153,700 square meters.

Meanwhile, early-stage discussions have been held among the Council Chairman, Council members and some other members of the University community on the exact locations of the above-mentioned projects. The possibility and feasibility of expanding the “short-fall building” to provide space for self-financed programmes is being explored. If affirmative, construction for the self-financed programmes part will require funding from non-government sources.

Consultations will follow. A university development forum will be held later to explain these projects in detail to staff, students and alumni and listen to their views.