of is initiating a Value for Money (VFM) Project that assesses the process of planning and resource allocation in academic and administration departments.

The VFM project illustrates the University’s dedication to ensuring quality service and accountability to the general public, staff members, students and stakeholders. 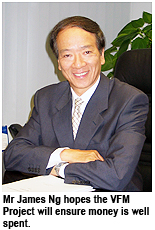 "The main purpose of the project is to promote a VFM culture in the University which can be used as an illustration of the University's public accountability," said Mr James Ng, Executive Director of City University Extension and Convenor of the VFM Steering Committee.

"We want to help departments achieve better value for money,” he said. "We don't intend to find fault. We want to improve."

He said the project was an integral part of the University’s strategy and would help departments achieve better VFM and ensure that money was well spent.

The project falls into two phases. In Phase 1, Ms Deborah Lampard and Mr Peter Wade, consultants from PhillipsKPA, a leading independent education consultancy group based in , will spend the first week of October at CityU conducting a series of consultations with up to 17 heads of academic and administrative departments.

The consultants will meet with the Management Board (MB) on 7 October to discuss how to build, develop and promote a VFM culture at CityU and give their preliminary observations.  Topics will include the extent to which VFM concepts are used at CityU; the extent to which benchmark indicators are used to review the efficiency and effectiveness of activities; and VFM practice at CityU. 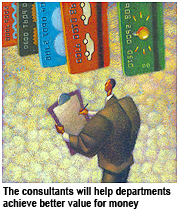 Phase 2 begins in early 2006 and will focus on recommending benchmark indicators for achieving VFM and developing a VFM Manual and Good Practice Guide.

CityU departments not included in Phase 1 would be involved at a later stage, Mr Ng said. "We envisage there will be further introductory sessions to VFM, hopefully by our own staff." The benchmarks and the VFM Manual could be used to conduct a similar project in the future, he added.

The VFM Steering Committee was established by the MB after the Council endorsed in April 2005 the recommendation from the Audit Committee of CityU on VFM matters. Besides Mr Ng, the members of the VFM Steering Committee are Chair Professor Eden Yu, Head of the Department of Economics and Finance, and Dr Ellen Ko, Director of Human Resources. Ms Libby Chow, Head of Internal Audit, is the Resource Person.  Dr Neale O’Connor, Associate Professor, Department of Accountancy and Mr Gabriel Chan, Director of Finance, are co-opted members.

Both Ms Lampard and Mr Wade have worked with ’s tertiary sector before. They worked for KPMG, one of the ‘big four’ accountancy firms contacted this year by CityU, when KPMG was appointed by the Audit Commissioner of the HKSAR Government to conduct the 2002 Value For Money Audit on Tertiary Education, in which CityU took part.

To help staff prepare for the consultations, the Committee is in the process of setting up a website. In addition, it has sent out a “Value for Money Studies Phase 1 Consultation Guide” to all department heads participating in Phase 1. The guide details the purpose and background to the study, and covers several issues and questions that will aid the consultation process.

For example, focus questions look at the cost-effectiveness with which resources are obtained; the efficiency of their utilization; the quality and relevance of the outputs achieved by those resources; the manner, and extent, to which the University plans its operations and focuses its objectives so that the points above are planned and not accidental; the extent to which the planning and objective-setting at University-level is replicated in academic and non-academic units; and the extent to which the University ensures such an approach is followed in practice.

Many of these questions flow from those asked in the VFM Audit in 2002 and the departments participating in Phase 1 of the VFM Project this year were chosen by the consultants based on the 2002 study.