of is organizing the “International Conference on Polymer Optical Fibre (ICPOF)” from 20 to 22 September (Tuesday to Thursday) at the Sheraton Hotel, . The annual conference promotes the research, study and application of plastic optical fibre. It is the most significant conference of its kind in the world and this year an estimated 200 experts, scholars and professionals in the field from 20 countries are expected to attend. 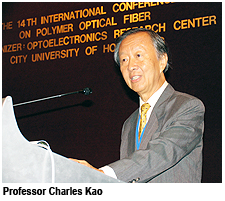 The Conference underscores CityU’s efforts in furthering the application and development of advanced technologies and its cutting-edge position in the field of optical fibre.

One major breakthrough in the field of optical fibre in recent years is the development of optical fibre made of plastic. It is said to be 30 times more sensitive than its glass counterpart for sensor applications. Up until now, optical fibre has penetrated many aspects of our daily life: telephone, cable television, Internet, and medical applications such as the measurement of blood pressure and cataract detection. It has also been used in the detection of submarines and the exploration of oil fields in the ocean bed. But with the advent of optical fibre made of plastic, it is estimated that within the next two years, optical fibre will be wired inside households alongside electric power cables to deliver broadband Internet service. One of the advantages is that plastic is said to perform better than its glass counterpart, which has the inherent disadvantages of being stiff, easily broken and cannot negotiate very sharp corners.

Prior to the Conference, participants joined a tour to Shenzhen for a workshop and visits to photonic companies such as ZTE and Photon. Shenzhen is said to be the photonic .

The Conference is organized by RCO and sponsored by 14 local and overseas companies involved in the optical fibre industry. Nine of the sponsoring companies are showcasing their products at the Sheraton Hotel.

Details of ICPOF can be found on the website www.icpof2005.com