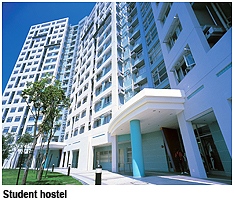 The University would like to clarify the situation regarding maintenance work at the Student Hostels following an untrue and misleading news article published in Apple Daily on 20 September.

There was an incident involving peeling ceiling plaster in one unit at Student Residence Hall 3 (Student Hostel Phase I) on 13 May this year. The University immediately urged the China State Construction Engineering Corporation, the builder, to undertake prompt maintenance work.

To avoid any recurrence, the builder and CityU undertook a thorough examination of all the hostels in Phase I during the summer. Subsequently, the builder remodeled the ceiling plaster in any rooms facing potential hazards. All construction work was completed in early August.

Architectural engineers then conducted a detailed examination and confirmed that peeling ceiling plaster would not affect the safety of the structure of the building and that the structure would not become dangerous in the future.

In the Phase II hostels, there have been cases of water leaking around the edges of the shower units in some of the bathrooms. An investigation revealed that the leaks were the consequence of substandard craftsmanship on the part of the contractor, China Civil Engineering Construction Corporation. The water seeping out from the showers caused the water-solvable glue adhered to the vinyl floor tiles to come off. The tiles, as a consequence, became loose.

The University promptly urged the contractor to investigate these incidents and in the past few months the contractor has completed remedial work and replaced most of the problematic tiles. There is a small portion of a public area that has not yet been remodeled because of a temporary shortage of tiles in stock.

The University has sent another letter urging the contractor to complete all remedial work in due course.

The University deeply regrets the inconvenience that the contractors have caused the students. Building maintenance is our priority, and we will continue to urge the contractors to complete all necessary work as quickly as possible.

We will honour our responsibility to monitor all maintenance work closely to ensure safety in all the hostels.

The University would like to reiterate that all CityU building projects are carried out in accordance with specifications set by the University Grants Committee.

There is no “luxury building” on our campus as alleged in the Apple Daily news article.