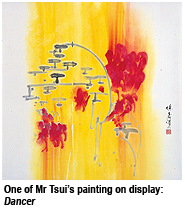 CityU Gallery held the opening ceremony of the “Signature Works of Kar Yeung” exhibition on 14 September.

The exhibition represents another example of City University of Hong Kong’s continuing efforts in promoting the development of Chinese culture and arts. 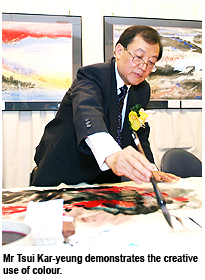 Mr Tsui Kar-yeung, a pioneer of post-modern Chinese art, has broken away in recent years from the traditional style of Chinese ink painting. This exhibition showcases more than 60 of his paintings, revealing not only his creative use of colour, but also his skills in expressing atmosphere and abstract ideas. His style mixes traditional Chinese with abstract influences. Mr Tsui said he had entered the world of abstract Chinese painting which had always been his dream.

The artist’s work is familiar to the CityU campus community. His paintings and calligraphy have been on display in various parts of the University since the then City Polytechnic moved to the Kowloon Tong campus in 1990.

The exhibition runs from 15 September to 2 October at the CityU Gallery on Level 6 of the University’s . Opening hours are from 10 am to 7 pm every day.