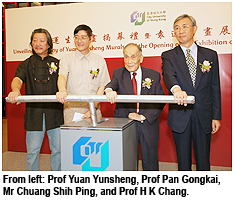 CityU hosted the Unveiling Ceremony of Yuan Yunsheng Murals and the Opening of the Exhibition of Yuan Yunsheng Paintings on 26 August.   The University invited the world-renowned artist Professor Yuan Yunsheng of the Central Academy of Fine Arts to create two murals measuring 10m x 4m each in celebration of CityU’s 20th anniversary.

“The two murals demonstrate that the Chinese tradition is a source of innovation as well as a foundation on which we Chinese can broaden our horizons,” said CityU President Professor H K Chang at the Ceremony.

“The murals also pay tribute to the Chinese people’s commitment in the pursuit of knowledge and scientific truth. They show that CityU not only strives to nurture greater interest in the humanities and sciences among its students, but also places great emphasis on applied research and professional education in creating a cultural ambience for its community,” he said.

The two murals, entitled “Scholar in Contemplation with Guqin” and “Wanhu Propelled to Heaven”, are high-quality original works dedicated to CityU. They have been mounted on the walls of the main entrance foyer of the University.  “The two murals hanging quietly at the entrance to the will gradually have a cultural effect on the campus and an artistic influence on the students who pass them every day,” said Professor Chang. 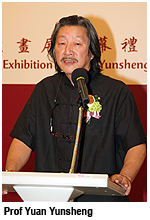 Professor Yuan Yunsheng is currently the Head of the Fourth Studio of the Department of Oil Painting and Vice-director of the Academic Committee at the Central Academy of Fine Arts. Introducing these two murals, Professor Yuan said: “In ‘Scholar in Contemplation with Guqin’, I have used the most unique Chinese musical instrument, the Guqin, to create the spirit of Chinese civilization. In ‘Wanhu Propelled to Heaven’, I use my imagination to portray Wanhu from the Ming Dynasty, the first human in history attempting to realize his dream of flying by propelling himself into the skies using rockets.   I am totally captivated by Wanhu’s scientific spirit, and I think today needs this kind of spirit.” 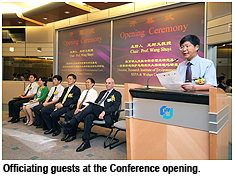 In addition, the “Exhibition of Yuan Yunsheng Paintings” will display Professor Yuan’s masterpieces of different art mediums over the years.  One of the exhibits is a replica of “Ode to Life — Merry-Pouring Festival”, a mural mounted in the . The exhibition will be held at the CityU Gallery from 27 August to 10 September.

Professor Yuan Yunsheng was born in 1937

in Nan Tong, Province. In 1962, he graduated from the Department of Oil Painting (Workshop of Dong Xi Wen) of the Central Academy of Fine Arts. In 1979, he created the mural, “Ode to Life — Merry-Pouring Festival”. He was invited to the Central Academy of Fine Arts to teach at the Departments of Mural Painting and Oil Painting the following year. An invitation to visit the United States in 1982 led to his appointment as Visiting Artist at Tufts University and the creation of a mural entitled “Red + Blue + Yellow = White? (On Two Ancient Chinese Myths)” for the university library.  Professor Yuan was also commissioned by to create the mural “Fable for Mankind”, which was unveiled in 1996. From 1983 to 1996, he had numerous solo exhibitions in various cities, including , , , , and .