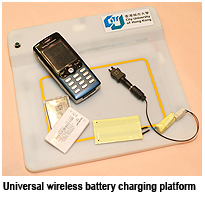 Consumers today are faced with the bother of using different sockets and cables to charge up their various hand-held electronic devices. But imagine charging up your mobile phone, MP3 and PDA (or those of your family or friends!) all at the same time using just one wireless platform. No wired-connector is required and charging is completely hassle-free.

Chair Professor Ron Hui of the Department of Electronic Engineering (EE), City University of Hong Kong, has developed such a platform. It is called a “universal wireless battery charging platform”. This breakthrough technology once again emphasizes the innovative spirit with which CityU researchers conduct their work and underscores the cutting-edge quality of the University’s applied research in electrical and electronic engineering. 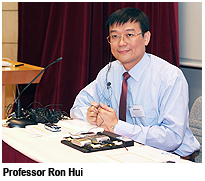 charging platform generates low-frequency electromagnetic field that will not harm the stored data in the devices being charged. Laboratory tests show that charging-up time is similar to that for conventional chargers. Five patents have already been filed.

To obtain energy from the charging platform, the electronic devices that consumers wish to charge up will need special receivers. “Ideally, our universal charging platform will work with a new generation of battery packs embedded with special energy-receiving elements,” Professor Hui said. But to cater to existing devices using conventional battery packs, Professor Hui has developed a secondary module, an external receiver that can be attached to the device while it is charging. 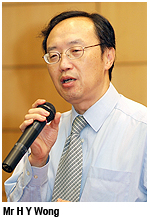 Some manufacturers in the mobile phone business have shown keen interest in producing Professor Hui’s charging platform. Mr H Y Wong, Director of Technology Transfer Office, CityU’s technology marketing arm, said that the University would consider transferring the technology through licensing. A charging platform is estimated to sell at a price range of HK$200 to $300. Meanwhile, the University has also talked to some battery manufacturers about producing battery packs incorporating the energy receivers, production of which depends on meeting regulatory requirements.

Professor Hui’s platform could revolutionize the future design of mobile phones, MP3s and PDAs. “If wireless charging is widely adopted and eventually becomes an international charging standard, then the design of power ports will become obsolete in future electronic devices,” said Professor Hui. Thus, wireless charging could bring about a new generation of water-proof electronic devices including, for example, instruments athletes use to measure performance in training. 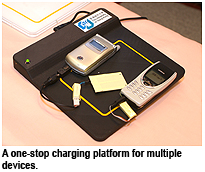 Looking further into the future, Professor Hui’s one-stop battery recharging solution will be highly valuable for travelers, journalists and businessmen who have to carry digital cameras, mobile phones and notebook computers on overseas trips. “Tomorrow’s hotel rooms should be installed with a universal charging platform, thus saving travelers the trouble of carrying around chargers,” Professor Hui said.

An accomplished researcher in the field of dimmable lighting technology, Professor Hui obtained his BSc in Electrical and Electronic Engineering from the University of Birmingham, UK, in 1984, and his PhD degree from the Imperial College of Science and Technology, , in 1987. He received a CityU 1998/1999 Teaching Excellence Award and, with EE colleagues Dr Henry Chung and Dr Wei Yan, the Grand Prize at CityU's Third Applied Research Excellence Awards in 2001. He founded a CityU subsidiary company, e.Energy, which was awarded a Hong Kong Science and Technology Parks Technological Achievement Award and a Consumer Product Design Award at the Hong Kong Awards for Industry, 2001 and 2004, respectively. Professor Hui was elected Fellow of the IEEE in 2003. His research interests include all aspects of power electronics.