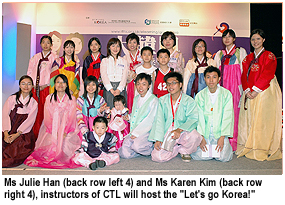 (RTHK), in collaboration with City University of Hong Kong , will launch a new Korean language radio programme entitled “Let's go Korea!” on 21 August.  Instructors from CityU's Department of Chinese, Translation and Linguistics (CTL) will host the programme, which aims to promote a better understanding of Korean language and culture among the public.  The programme is sponsored and supported by the Consulate General of the Republic of Korea in Hong Kong.  CityU is a leading university in in offering Korean language courses, with an aim to fostering cross-cultural international perspectives among its students and enhancing their communication skills. 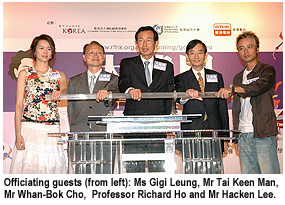 “I am delighted to see the launching of a Korean language broadcast programme in , especially one that is jointly produced by the respected RTHK and CityU,” said Mr Cho. “Such a partnership will surely bring us a high standard programme. Recently, the popular TV series Dae Jang Gum helped many local people realise that there are quite a few common traits between the Korean and cultures. Learning its language is the first step in better understanding and its culture. people may be interested to know that there are some similarities between Korean and Cantonese pronunciation, which might heighten their interest in learning Korean."

Both Ms Han and Ms Kim have taken part in the production of “Let’s go !” and have compiled a course booklet for the programme.  They are both very excited to have the chance to introduce the Korean language and culture to the public through the broadcasting media.  “This is a very meaningful task for us, and the process of producing and recording the programme is also very enjoyable.  We hope this programme can serve as a bridge, bringing more local people to learn Korean vocabulary and basic conversation, as well as helping them explore the features of Korean culture,” Ms Han said.

“Let's go !” will air from 21 August at 8:00 pm every Sunday on RTHK Radio 2.  At the same time, RTHK will launch a specialized website (www.rthk.org.hk/elearning/gogokorea) to complement the programme.  The content includes a message from Mr Cho; an overview of the different episodes, plus biographies of the programme hosts; Korean Classroom, an archive for listeners to review and practise Korean pronunciation and vocabulary; the Hottest Korean Phrases, which teach the audience to write and pronounce the names of Korean celebrities and tourist attractions; and Introduction to Korean Culture, which looks into the different aspects of Korean custom and folklore.  Listeners can also hear Korean conversation demonstrated by Mr Hacken Lee and Ms Gigi Leung, and test their knowledge of the Korean language through an online game.  In addition, from 15 August, RTHK will launch a one-minute programme entitled “Korean Daily Talk” on Radio 5 at 4:30pm from Monday to Friday.

The course booklet, specially compiled for “Let's go !”, is published by the City University of Hong Kong Press, with an aim to providing an easy grasp of practical Korean conversation and a basic knowledge of Korean culture to the readers. The booklet will be distributed free to local public libraries and institutions.

CityU’s CTL started a course in Korean studies in July 2003 and since then some 500 students have enrolled. From September 2004, CTL began offering a minor in Korean Studies which focuses on the social, economic and cultural aspects of , in addition to Korean language. Moreover, CTL has frequent exchanges with renowned Korean universities. Every semester, a number of CityU students visit Korea for cultural and academic exchanges, while other CityU students undertake summer internships in leading Korean enterprises.  CTL has been striving to provide cross-cultural learning opportunities for students, aiming to broaden their international horizons.