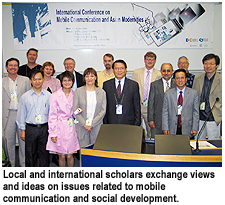 An International Conference on Mobile Communication and Asian Modernities was held on 7-8 June by the Department of English and Communication (EN) at City University of Hong Kong. The Conference brought together 21 local and international scholars to exchange information, opinions and new ideas on issues related to mobile communication and social development. It reflected CityU’s strength and expertise in this emerging  discipline, and represented just one of the University’s many endeavours in contributing to academic research in the Asia-Pacific region and beyond.

The mobile phone has fast become an integral feature of ‘modern’ life, giving rise to a rich dialogue over the past decade on the role of the mobile telephone in social, cultural and economic systems.Yet current research is dominated by western theories of modernity. So far, relatively little research has explored the use of mobile communication within .

“It remains an open and important question whether these theories are sufficient to explain patterns of mobile use and social change observed in Asian contexts,” says Dr Angel Lin, Associate Professor in the EN and one of the Conference organisers.

The aims of the Conference are three-fold: to examine and contrast Asian experiences with mobile telephones; to enrich general theories about the interaction of mobiles and society; and to use the phenomenon of mobile use in Asia to re-examine general concepts of modernity, globalization and culture.  “Put simply, how do Asian peoples invent, produce, appropriate and use mobile communication technologies to explore and negotiate their own modernities,” Dr Lin said.

Two scholars from CityU presented papers at the Conference: Dr Lin analyzed how migrant workers in Southern China used mobile text messaging not only for information about jobs but also to create an alternative social space in which conservative sexuality and romance norms and practices could be relaxed and more liberal male-female social relations and interactions tried out. 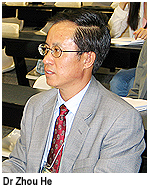 Dr Zhou He, also an Associate Professor in the EN, discussed the development of the cellular phone in China from an interpersonal communication tool to a quasi mass communication channel; the spread of deviant expressions through it; the making of deviant discourse through SMS; the government’s control over SMS; and the implications of the role of SMS in the evolution of China’s increasingly plural political undercurrents in various discourse universes.

Participants of the Conference came from Australia, Bangladesh, France, Hong Kong, India, Italy, Japan, the Netherlands, the Philippines, Singapore, South Korea, Vietnam, and the USA, to discuss the growing body of research on how use of mobile phones both reflect and reshape society’s definitions of public and private spaces, work and home spheres, gender roles, adolescence, individuality, sexuality, political participation, etiquette, and social norms.

“This conference marks an important step in the progression of our understanding of the social and economic implications of the rapid spread of mobile communication around the globe,” said Dr Jonathan Donner, Post-Doctoral Fellow at the Earth Institute at and a speaker at the Conference. Professor Leopoldina Fortunati, from , said this Conference marked a new chapter in mobile technology and cultural studies research. “It represents the first attempt to discuss concepts and categories used very frequently in the public debate such as modernities, individualization, etc, but which might mean something very different for western and Asian cultures.”