Charting the future with cautious optimism

Professor H K Chang, University President, reported on key issues that the University confronted in the past year, outlined activities that lie ahead and listened to staff concerns about University development in a "University Development Forum" held on 24 May in the Wei Hing Theatre.

Professor Chang opened the forum with optimistic remarks: “This year, we’re in better spirits and things are starting to look up.” CityU has withstood the threat of four budget cuts, including a 10% across-the-board cut and a 20% cut due to phasing out of 13 of the 19 Associate Degree (AD) programmes within four years and cessation of University Grants Committee (UGC) funding of all taught postgraduate programmes.

“History shows that the most important asset of this University is staff's dedication and people's cooperation,” Professor Chang said. Instead of devising policies which would shatter the spirit and dedication that created CityU, the University opted for measures that increased efficiency and productivity. For instance, Professor Chang said, the University proactively reduced the budget by 10% one year ahead of the anticipated cut, introduced two voluntary departure schemes to lighten the

burden of staffing costs and froze the annual salary increment. “Finally and most importantly, our staff pull together—teaching, academic and support staff—to run the self-financing programmes that generated revenue to make up for the shortage.Today, I’m happy to report that we are in a fairly healthy financial position,” he said.

However, the President also cautioned that due to the phasing out of the AD programmes, the University has not seen the end of cutbacks. A deficit is predicted towards the middle of the next triennium. “We would like to maintain the same level of funding and stability in the next triennium as in 2004-05, so the University will have to dip into reserves to make a flat budget and to maintain the quality of education and other programmes,” he said. “We are largely out of danger, just like coming out of an intensive care unit. But that doesn’t mean we need not worry.”

Professor Chang mentioned a delegation's recent visit to universities in northwestern to identify benchmark models. Among the universities visited, the in the and the in the were particularly impressive. Both universities have a history of about 40 years. The calls itself "an entrepreneurial university" that focuses on a few strategic areas of development and characterizes its research as fundamental-strategic in nature with a practical focus. The calls itself "an entrepreneur-based and research-based university" with real-world experience for students. “We found that there is a lot to learn from each other,” Professor Chang said.

New challenges in teaching and learning 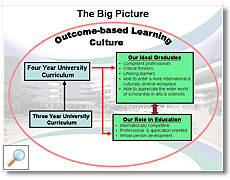 With regard to teaching and learning, Professor Chang reminded staff that CityU has received high praise in two rounds of Teaching and Learning Quality Process Review (TLQPR). “Our past successes in teaching and learning are undisputable,” the President said. He also reaffirmed that CityU is moving in the right direction with a substantial shift in emphasis from teaching to learning.

In response to the UGC’s emphasis on transforming education in local institutions into outcome-based learning processes, the University recently appointed a Dean of Undergraduate Education and a Dean of Student Learning.

In the years to come, the University faces the challenge of preparing and realizing the goal of a four-year curriculum. Professor Chang believes that the UGC does not require CityU merely to extend the curriculum by one year, but to achieve an integrated learning experience for students. “This is an opportunity for us to redefine our character and come up with innovative new programmes,” he said. “The UGC expects us to demonstrate that we can meet the needs of students and of society in the next 10 to 15 years. We need to ensure the compatibility of our role in education as prescribed by the UGC and our own descriptions of the ideal graduate.”

Professor Chang also recounted CityU’s achievements in applied research, giving as examples its business incubations, patents and consultancy services. “CityU is one of the most active incubators of start-ups among local universities,” he said. “Currently, there are over 30 active companies under the umbrella of CityU Enterprises Ltd, of which five to six are profitable and very promising. All of them came from home-grown technology and the key personnel is our staff.” With support from the Innovation & Technology Fund and other sources, which amounted to HK$63.7 million between 2001 and 2004 and a turnover of HK$140 million from over 2,150 consultancy projects undertaken in the same period, the results readily demonstrate that the University’s achievements in applied research are recognized. Between 2002 and 2004, over 80% of the thesis topics of the 484 MPhil and PhD degrees awarded were in the category of applied research. 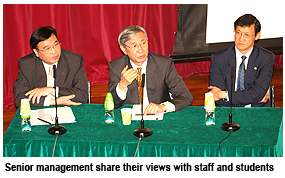 CityU's Deans recently came up with a definition of applied research borrowed from the Australian Standard Research Classification 1998 which reads: “Applied research is defined as original work undertaken primarily to acquire new knowledge or technique with a specific application in view. It is undertaken either to determine possible uses for findings of basic research or to determine new ways of achieving some specific and predetermined objectives”. There are different interpretations of "applied research", said the President, "and this is the most pertinent to CityU. But applied research does not mean you apply somebody’s results, just like you take a recipe and cook. Cooking with a recipe is not research; coming up with a recipe is research,” he said. “Applied research involves a lot of curiosity and the discovery of knowledge with predetermined objectives.”

In addition to preparing for the four-year curriculum, shaping an outcome-based learning culture and revising the mission statement, Professor Chang told staff at the forum that internationalization, the expansion of activities on the mainland, resolving the issue of an inadequate amount of teaching space and upholding the quality of self-financing teaching activities are key areas for future development.

The future of depends to a large extent on the development of the mainland, integration of economies and closer collaboration of all fronts. In view of this, the University set up a Steering Committee on Mainland Activities. “We would like to position ourselves as the hub of the Pearl River Delta and in terms of education and professional services,” Professor Chang said. “Thus, we need to build CityU’s image which is intimately related to the success of our alumni.” He explained that participation in the National Joint Entrance Examination Scheme aims to establish CityU firmly among the key state universities on the mainland.

While the Community College of City University building and the Creative Media Centre are in the pipeline, the University will make a request for two more student hostels in the capital projects proposal to be submitted to the UGC, in addition to seeking Government approval for proposals for two academic buildings near the open carpark and across Cornwall Street.

At the Q & A session, staff raised a number of questions and concerns, mainly about the University’s financial situation and teaching and learning.

Some staff members were aware that about HK$200 million was generated from the University's self-financing activities of the past year. Two staff members asked if the University will give the money back to departments to use to improve teaching quality. In response to these questions, Professor David Tong, Deputy President, pointed out that 70% of the income from self-financing activities already goes directly back to the departments. The 30% that the University keeps goes, in the main, to administrative departments, such as 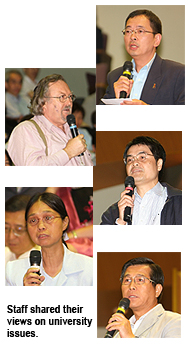 the Library and the Facilities Management Office. “The departments should make good use of the money coming back to them to ensure a reasonable teaching load,” Professor Tong said. He assured them that the University intends to launch five scholarship enhancement schemes, of which, two are related to teaching and learning. Professor Y S Wong, Vice-President (Administration), also mentioned that our new Dean of Undergraduate Education and Dean of Student Learning have launched initiatives geared to enhancing our overall teaching commitment.

One staff member asked if the University would return to the staff the 6% pay cut of the past two years. In response to this, Professor Wong reminded the colleague not to overlook the long-term budget situation. He pointed out that our budget situation is better because this is only the first year in which College funding was suspended. Starting from next year, particularly in 2007 and 2008, the University will suffer a significant deficit. “This structural deficit could be HK$100 million, or more, a year and last for ten years. We should reserve the income for the future,” Professor Wong 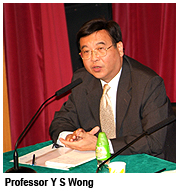 Professor Chang also reminded colleagues that the HK$200 million, to a large extent, could only make up the cuts from the taught postgraduate programmes and the AD programmes. He urged CityU colleagues to be patient, because using the money for salary restoration would force the University to squeeze some educational activities that serve students. He said, “Our financial situation is just healthy enough to get out of the ICU. If we run off to play basketball now, we’re going back to the ICU pretty quickly.” He emphasized that we can barely make ends meet and need to dip into reserves in the next two years. He hoped that our colleagues don’t think that the University has some mysterious surplus.

In response to concerns about the ideal graduate CityU portrays, graduate employment and student well-being, Professor Chang commented that outcome-based learning will be significant since it highlights what students learn, rather than what the teacher has taught. With this mode of teaching, teachers will have more responsibility to motivate students and influence their attitudes. As for graduates' career prospects, Professor Chang pointed out that the University’s image is crucial. “Most employers,” he said, “including ourselves, look at the reputation of the university from which the student graduated.” He stressed that CityU’s good image must be maintained and he encouraged staff to work harder to provide students with whole person development and quality academic education.

“Our future really is in our hands,” Professor Chang said. “If we want to do well for the University, for the students and for ourselves, we need to work together as we’ve done in the past.”