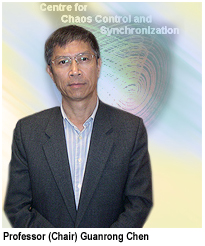 Professor (Chair) Guanrong Chen of the Electronic Engineering Department has been selected to receive the 2005 IEEE Guillemin-Cauer Best Transaction Paper Award from the IEEE Circuits and Systems Society. This is another example of CityU professors' achievements in applied research and demonstrates that the University's research work enjoys world-wide recognition.

Professor Chen's award-wining paper (co-authored with his research fellows Dr Xiang Li and Dr Xiaofan Wang), entitled "Pinning a Complex Dynamical Network to its Equilibrium", was published in IEEE Transaction CAS-I, Vol. 51, No. 10, (October 2004). The paper examines a control problem for complex dynamical networks related to a new chaotic system discovered by Professor Chen in 1998 and the new system was named after him. Chaos, a very special type of nonlinear dynamics, has proved useful in electronic engineering and information technology such as network security and data encryption, which has been a focused research topic of CityU's Centre for Chaos Control and Synchronization. Professor Chen is the founding director.

The 2005 IEEE Guillemin-Cauer Best Transaction Paper Award is the second such award Professor Chen has received within five years. His previous award was bestowed by the IEEE Aerospace and Electronic Systems Society in 2001. Among all those published in the IEEE Transactions every year, just one outstanding paper from a particular technical society of the IEEE is selected for this prestigious international honour.

Professor Chen joined CityU in 2000. In April 2005, he became Honorary Guest-Chair Professor of the and Technology of China. Prior to this honorary professorship, he was also conferred the same title by several distinguished universities in , the most recent being .