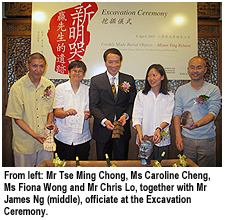 “Freshly Made Burial Objects – Mister Ying Reborn”, is now on display in the CityU Gallery from 8 April to 16 May. The ceramic works by four artists, Caroline Cheng, Chris Lo, Tse Ming Chong and Fiona Wong, revisit the creation of the Qin Dynasty terracotta soldiers. Based on their reinterpretation of the burial objects of the Qin Dynasty, the artists used clay as a medium to deliver a new form of ceramics installation.

At the opening ceremony held 8 April, the four artists and Mr James Ng, Chairman of the CityU Gallery Management Committee and Executive Director of CityU Extension, officiated at the Excavation Ceremony, 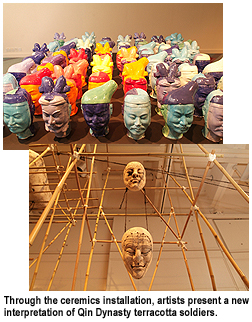 signifying the rebirth of the terracotta soldiers. Terracotta soldiers are contemporary Chinese icons. People perceive them as an important work of art. It is the biggest ceramic installation in the world, designed to serve as burial objects for Emperor Qin.

Specializing in ceramics and installation art, the four artists have held exhibitions in , , the , , and on the mainland. Over the past three years, they have been working on the Mister Ying Reborn project. The original idea was to use the terracotta soldiers in relation to Chinese history as a starting point for each of them to create some pieces for a single, comprehensive, intelligent ceramic project.

Caroline Cheng uses soldiers as a post modern art installation -- each has its own unique point of view. Her first exhibit uses representational, iconic forms in an abstract way to express her rediscovery of ancient ceramics. Her second piece displays 56 heads representing 56 different kinds of people in . By putting masks of Chairman Mao on the faces of the terracotta soldiers, the identities of the soldiers are transformed into a group of masked heroes. Chris Lo uses ceramic puppets to explore the interactive relationship between the empowered and the ruled and how history repeats and evolves in time. Tse Ming Chong reinvestigates the history and culture of the Qin dynasty. He attempts to sculpt contemporary through a series of newly buried objects. Through the re-creation of ancient armor, Fiona Wong revisits the creative process of the ancient craftsmen of the famed terracotta soldiers and reflects on the experience as a bridge between the realm of the artists and the domain of artisans.

Located on Level 6 of the , the CityU Gallery regularly hosts exhibitions to promote art and culture to CityU staff and students and the general public. Freshly Made Burial Objects – Mister Ying Reborn is on until 16 May. Opening hours are Monday to Friday, 10am to 7pm.