Professor Li Ping of the Department of Electronic Engineering, City University of Hong Kong, has been made a Croucher Senior Research Fellow for his distinguished research achievements in mobile communication systems. He received the award at a ceremony officiated by Mr Justice Andrew Li, the Chief Justice of the Court of Final Appeal, Hong Kong SAR,  on Wednesday, 16 March 2005. 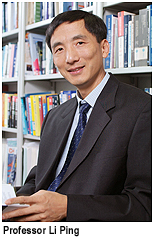 Professor Li’s research interests embrace mobile communications, information theory, VLSI design and signal processing. He received a British Telecom–Royal Society Fellowship in 1986 and an IEE JJ Thomson premium in 1993 for his innovative VLSI circuit design for use in commercial mobile phone receivers. One of his recent research contributions is a coding technique that can nearly achieve the so-called ultimate low-rate channel limit established about 50 years ago by Claude Shannon, the founder of modern information theory. Today, his research focuses on fourth generation mobile communication systems.

During his year as a Croucher Fellow, Professor Li will continue to work on the “Interleave division multiple access (IDMA) for the next generation mobile communication systems”.

The Croucher Senior Research Fellowship awarded to local academics that have excelled in scientific research work, was first introduced in 1997/98. The value of each Senior Research Fellowship is about US$100,000. In recognition of their success and to encourage further achievements in their chosen fields, funds are awarded to their respective institution for recruiting an academic to take over the Fellow’s duties for the period of the fellowship. The Fellow will then be relieved of teaching tasks for six months to one year and is expected to devote more time and effort to his research. Each winner also receives a cash award of HK$40,000.

Engineering and mathematics projects do well in CERG exercise