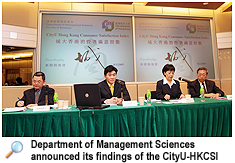 of ’s Department of Management Sciences (MS) announced its findings of the “CityU Hong Kong Consumer Satisfaction Index (CityU-HKCSI) 2004” today.  The findings show that the overall satisfaction level of local consumers in 2004 reached a record high, as a result of the overall improvement in consumer satisfaction with all sectors.

The CityU-HKCSI is a performance indicator developed by MS for business, measuring the satisfaction level of consumers towards the quality of most goods and services that can be locally purchased.  The 2004 CityU-HKCSI is based on findings from more than 10,000 consumer interviews successfully conducted by the Department through a computer-assisted telephone interview system during the third quarter of the year.  The Department introduced the CityU-HKCSI in 1997. Since 1998, its findings were released every year.

Dr H P Lo, Head of MS, said, “In a highly competitive and service-oriented economy like Hong Kong, a company’s success depends more on improving its products’ quality than increasing productivity. In the past eight years, we had successfully conducted approximately 100,000 consumer interviews to collect data to come up with the CityU-HKCSI. The index complements traditional quantity-based economic performance measures. In line with the University’s mission to contribute its research output to the community, the CityU-HKCSI is also aimed to provide valuable information to all parties concerned: the firms, shareholders, investors, government regulators, and consumers.”

Ms Connie Lau Yin Hing, Deputy Chief Executive of Consumer Council, said, “We believe that the models developed by CityU’s Department of Management Sciences using advanced statistical and marketing research methods, and multi-item scales to measure consumer satisfaction, which relate consumer satisfaction to its causes and consequences, help enhance the quality of products and services and ultimately benefit the consumers.”

69 commodities and services were categorised into Clothing & Personal Care, Food & Drink, Housing & Related Items, Transport, Information & Entertainment and Non-CPI Items. The categories, accounting for over 75% of the weightings in the composite Consumer Price Index (CPI), have been taken into account in calculating the CityU-HKCSI.

Announcing the findings for 2004, Dr Geoffrey Tso, Associate Professor of MS, said “The CityU-HKCSI has a scale of 0-100 to represent ascending levels of consumer satisfaction. In 2004, CityU-HKCSI increased 1.8% to a record high of 69.1 from the 2003 score of 67.9.  The Sub-HKCSIs of all six product categories registered certain increase. In particular, Clothing & Personal Care witnessed a substantially higher Sub-HKCSI increase of 3.1%, while the other five product categories also achieved noticeable consumer satisfaction improvement rates of 0.8~2.1%.”

Among the six product categories in 2004, Hong Kong consumers were most satisfied with Clothing & Personal Care that achieved the highest Sub-HKCSI of 74.1, followed by Transport of 72.3 and Information & Entertainment of 72.1, and then by Food & Drink of 71.2 and Non-CPI Items of 69.3. They were least satisfied with Housing & Related Items which received a substantially lower Sub-HKCSI of 64.7.

At product level, Hong Kong people were most satisfied with film which reported the highest CSI of 80.0 in 2004, followed by music CDs of 79.7 and jewellery of 78.3. It is noticed that music CDs, film, rice, dairy products & non-alcoholic drinks, edible oil, and proprietary medicines & supplies had continuously showed up in the top 10 CSI lists since 1998.

At the other extreme, local consumers were least satisfied with shopping in Shenzhen which received the lowest CSI of 57.1 in 2004, preceded by job-seeking magazines of 59.0 and renting public houses of 62.5. It is found that renting private houses, renting public houses and weekly magazines had always been among the bottom 10 CSIs since 1998, and shopping in Shenzhen, job-seeking magazines and job-seeking websites had always appeared in the bottom 10 CSIs since they were included into the HKCSI programme in 2001.