Between globalisation and cultural diversity 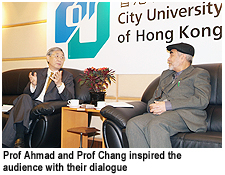 The President of City University of Hong Kong, Professor H K Chang, held a meaningful discussion with Professor Anis Ahmad, Vice-Chancellor of Riphah International University, , on the preservation of cultural diversity in the face of globalisation and modernisation, 1 March. Professor Chang and Professor Ahmad shared concepts of plurality, respect for cultural diversity and mutual understanding, despite disparate upbringings in different parts of the world, namely East Asia and South Asia, respectively.

An accomplished scholar in biomedical engineering, Professor Chang is deeply interested and well-versed in the history and culture of Islam. He delivered “Islam in ” and “The Impact of Chinese traditional culture on Islam”, a lecture series on Islam and at CityU’s Chinese Civilisation Centre in October and November last year.

Professor Ahmad is concurrently Meritorious Professor of Islamics and Comparative Religion at the Riphah International University. He is also Editor-in-Chief of West and Islam, a quarterly journal published in . Enthusiastic in expounding Islamic views, he has been invited to speak at numerous conferences across the globe. Professor Ahmad was invited by the Islamic Union of Hong Kong to give a series of lectures on Islam and related issues, from 23 February to 1 March, at local universities as well as various cultural and religious communities. Two of the lectures were delivered at CityU, organized by the University’s Southeast Asia Research Centre.

Professor Chang introduced the theme for the dialogue, saying: “Biological diversity is good for the whole system on earth; cultural diversity is good for the future of humanity.” He went on to analyse the “imbalance” of the modern world, characterised by the fact that "some parts of the world have larger voices and better means of projecting their views to the other parts of the world" and that when two value systems meet, some sort of competition, whether in the form of trade or in the imposition of one side's ideas over the other's, might occur. Professor Ahmad echoed, “The biggest threat presently is the imposition of one single culture over the global village -- one single ideal of quality of life.”

Throughout the one-and-a-half hour of discussion, one issue of the utmost concern to Professor Chang was how, when two cultures meet or interact, the less advantaged system should respond to the challenge of the more dominant one, in order to learn and to adapt, yet, at the same time, preserve its cultural identity. “I believe intellectual interaction and fertilisation is more penetrating than political conflict,” Professor Ahmad said. “We in academia can transmit our values to new generations through the integration of those values into our teaching methodologies.”  Professor Ahmad believes that academia plays an important role in promoting mutual understanding between people of different backgrounds, while providing room for cultural diversity.

"Family" is another core value of prime concern to Professor Chang. With reference to the situation in , such as the prevalence of small living quarters and westernisation, Professor Chang observed that the Confucian value of the extended family has given way to the western norm of the nuclear family. He cherishes the virtue of “trans-generational habitation”, which many social workers in the now recognise as the ideal way of living. He raised the question: “How can we, in an era of urbanisation, sustain the type of extended family living that I grew up with when I was a little boy? Without this context a grandfather's wisdom cannot be passed to his grandchildren.”

This view drew an emphatic response from Professor Ahmad, who concurred that in the Islamic tradition, the concept of family is not nuclear, but extended. “Marriage is, for me, an ethical and moral contract. But if, for some reason, we discourage family, and allow people to live together without any moral obligations, and without having children, then we are heading towards the destruction of civilisation.” He suggested working on two levels to sustain extended family. At the architectural level, urban apartments could be designed with a room in which grandparents could stay overnight. At the academic level, students could be taught about "family" based on ethical and moral values, about the extended family as an alternative to the nuclear family, and they could be given guidance within their education programmes 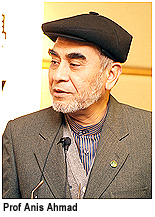 on how to develop a happy family.

Citing historical developments in China, Japan and other South East Asian countries over the last few centuries and their experiences of modernisation, Professor Chang raised the question of how Islamic society responds to the challenges of the contemporary world. “I think this is an ongoing process; I do not have a ready answer or solution,” Professor Ahmed said. “The Islamic structure is not a limited structure. It is flexible, so long as some basic assumptions are agreed.”  Islam is progressive and allows new interpretations as long as the principles of the Qur’an are observed. He believes that the question of how to cope with change requires a very objective and critical evaluation of methodologies.  “We cannot obtain ready- made solutions simply by adopting the methodologies of others. We should adapt ideas from the West and develop our own. Adaptation is the secret of progress; adoption is the death of progress,” Professor Ahmad concluded.

Islam in China: A cross-cultural observation
The impact of Chinese culture on Islam