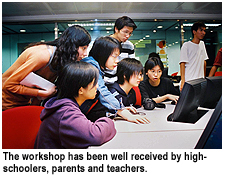 The Department of English and Communication (EN) will launch its second New Media Workshop and Competition on 19 March. High-school students will have the chance to showcase their talents in new media communication by participating in the competition. Working in teams of four, participants will compete in the design and development of outstanding multimedia web pages. They will interview members of a local rock band, Tai Tau Fat, photograph them, write promotional materials and short album reviews, edit video clips, and create different multimedia components. The competition is open for applications until 13 March. Eight outstanding teams will be selected to participate.

“This Workshop and Competition epitomizes CityU’s philosophy of integrating classroom teaching with real-world experience. The teams appreciate what it means to live in an environment of increasing media convergence,” said Professor Lee Chin-chuan, Head of the EN. 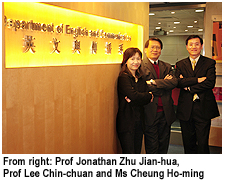 Gifts sponsored by renowned new media companies, including Adobe, Macromedia and Senco-Masslink, will be awarded to the winning teams. “We have been fortunate enough to build partnerships with major IT firms and media organizations such as the SCMP, Ming Pao and RTHK. They have much good will towards youth, and a strong sense of social responsibility,” Professor Lee said.

CityU is dynamic and forward-looking. The University’s EN is already at the forefront of new media and communication education; it will share its state-of-the-art knowledge and technology with a selected group of bright high-school students, in order to highlight the central role of new media in daily life.

The Department is home to new media staff who teach, conduct research, and provide consulting services on a wide range of new media platforms. Students of the Department’s MA in Communication and New Media have won awards three times in the annual Asian Inter-University Multimedia Design Competition organized by Radio Television Hong Kong.

“We conduct research projects on the diffusion, use, impact, and regulation of new media technologies in , and elsewhere,” remarked Professor Jonathan Zhu Jian-hua, convener of the competition. “The EN has served the World Internet Project via its branch by carrying out five annual surveys of Internet use in between 2000 and 2004. The results have also become part of the national record on Internet development compiled by the China Internet Network Information Centre at www.cnnic.cn,” he said. The World Internet Project originated at the for Communication Policy and was founded with the NTU School of Communication Studies in and the Osservatorio Internet Italia at in .

The Department held its first New Media Workshop and Competition in October 2003. “It was so much fun making a web page in a short time,” said Wong Hing-chiu and Lui Ka-cheong from Diocesan Boys’ School, capturing the feeling of the participants of that year. The student response to the first event was so enthusiastic that the Department decided to expand its capacity and accommodate 70 participants.

CityU promotes Whole Person Development with cultural and IT elements. “It is not only about computer skills,” explained Ms Cheung Ho-ming, Instructor I of EN and organizer of the competition. “We try to bring students’ communication abilities to the fore and cultivate their sense of aesthetics and creativity through a new media interface. Team spirit and cooperation are essential, since the teams have to complete their projects within one day.”