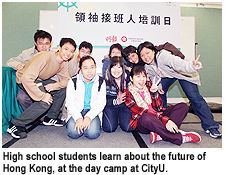 How should the next generation of Hong Kong students equip themselves to become future leaders? On 26 February, Ming Pao Daily and ’s Commerce, Industry and Technology Bureau jointly held the 4th  annual “Soar Over Hong Kong” – a leadership training day camp at CityU --to seek the answer.

CityU President Professor H K Chang, Professor Anthony Cheung of the Department of Public and Social Administration, Professor Stephen Cheung, Chair Professor in the Department of Economics and Finance, and Dr Lester Chan of the School of Creative Media, shared with the audience of 200 high-school students from 110 high schools and 40 university undergraduates their vision of Hong Kong's future -- its political system and economy, and the future development of its creative industries. Through participation in the day camp, students could better understand the advantages and potential of   and equip themselves accordingly in order to make a quantum leap forward in their career development.

As usual, Professor Chang exuded smiles and democratic spirit during  his talk. He offered eight topics for discussion, including: culture and technology; "one country, two systems"; internalisation and nationalisation; economic efficiency and social justice; and innovation and tradition. In response to the students' requests, Professor Chang shared his views on Hong Kong's economic efficiency and social justice and on innovation and tradition.

Professor Chang began with the two major trends of ideas and political forces emerged in the 19th century -- capitalism and socialism. He pointed out that although socialism emphasized justice as a counterbalance to capitalism, it belatedly realized that it has to 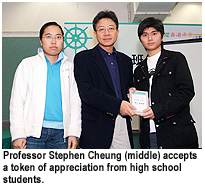 learn from capitalism in order to enhance productivity and economic efficiency. Meanwhile, capitalism also came to realize that it must establish a social welfare system to ensure social justice and equality. “So, we can’t abandon the capitalist system that has been established by us lest the people lose the dynamism of striving. Apart from that, we must continue promoting every measure to ensure the social justice gets protected,”  Professor Chang said.

When talking about the prospects of ’s future development, Professor Chang emphasizes that because of the lack of natural resources, creative industry will be one of the main thrusts of ’s future economic development as it has the most densely populated population in the world. But then he hoped that while striving for innovation the students shouldn’t forget their traditions. He encouraged the students to treasure their moral values. “If you value justice, Hong Kong will have justice. If you value efficiency, Hong Kong will have 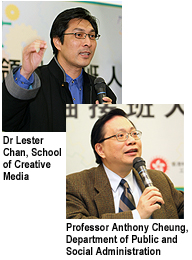 Professor Chang ended his speech in a big round of applause. Following his lead, Professor Anthony Cheung, Professor Stephen Cheung and Dr Lester Chen continued to update the students on the recent developments and discussions in ’s political system, economy and creative industry.  Professor Anthony Cheung told the students: “As the future leaders, you are supposed to lead the society to go forward, and thus you must clearly understand the great challenges in store for the society.” Professor Stephen Cheung and Dr Lester Chan emphasised that “creativity” is what needs to overcome economic and cultural challenges.