Professor Pai Hsien-Yung on the art of Kunqu 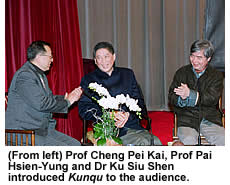 ‘I have seen many kinds of performing arts in different parts of the world and I still believe that Kunqu is the most refined. The most beautiful flower is planted in our own garden!” Professor Pai said. On , the United Nations Educational, Scientific and Cultural Organization (UNESCO)identified Kunqu to be the first among the 19 masterpieces of oral and non-material heritage around the world. The outstanding artistic achievements and the traditional cultural value of Kunqu is recognized internationally. 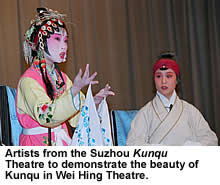 “Kunqu uniquely blends poetic eloquence, musical refinement and dramatics. Its plots are elaborate poems of high literary quality. All motions and emotions are expressed by the elaborately made up and resplendently robed actors through dancing, singing and acting against a stark background on a bare stage with minimum props," Professor Pai said. "Kunqu is a world-class performing art transcending time, culture and districts. No wonder it has won world acclaim as the most valuable cultural heritage.” 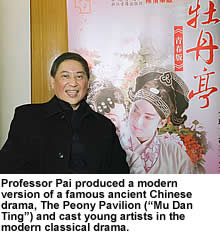 Professor Pai has been promoting Kunqu over the past few decades. Recently, he produced a modern version of a famous ancient Chinese drama, The Peony Pavilion (“Mu Dan Ting”) and cast young artists in the modern classical drama. At the invitation of the CCIV, Professor Pai brought with him artists from the Suzhou Kunqu Theatre to demonstrate the beauty of Kunqu in CityU's Wei Hing Theatre. Professor Pai plans a roving  performance of Kunqu in various universities on the mainland.

Established in July 1998, the CCIV has successfully introduced a rich curriculum and flexible teaching methods, including the innovative web-based teaching, to promote Chinese culture to CityU students. The Centre also organizes related actiivities, such as lectures, workshops, field trips and exhibitions.

An exhibition on the aesthetics of the renowned , “Piled Rocks and Dredged Waters: The Art of Suzhou Gardens,” is being held at the CityU Gallery. All are welcome.