Strengthening ties with the community with strings and chords 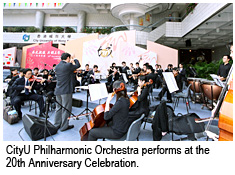 On 19 February, the City University Philharmonic Orchestra will stage its annual performance  in the Concert Hall of Hong Kong's City Hall, for the very first time, strengthening ties with the community.

The CityU Philharmonic Orchestra, established in 2000, comprises about 60 students, staff and alumni. “The Orchestra has grown remarkably fast in the past five years, especially in terms of technique. We’re playing many pieces that are  challenging even to professional orchestras,” said Richard Yen, External Vice-President of the Orchestra and a Year 2 student. “This year’s annual performance at City Hall symbolizes a milestone in our level of confidence.” 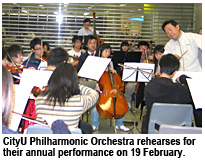 At the annual performance, the Orchestra will play Piano Concerto No. 1 in B flat minor, Op23, by Tchaikovsky and Symphony No. 1 in D Major, “Titan” by Mahler, both of which require sophisticated skills from both the conductor and the musicians, Richard noted. Under the guidance of the renowned conductor Mr K K Chiu, the Orchestra is well-prepared for its performance. 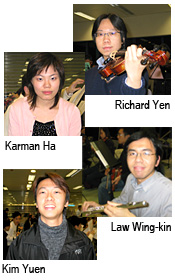 “Our conductor likes us to tackle difficult music. With his advice and encouragement, my technique has improved drastically within just one year,” said Karman Ha, Internal Vice-President and Year 2 student.

Kim Yuen, the President of the Orchestra and a Year 2 student said that he learned a lot about other musical instruments after joining the Orchestra. “The benefit and joy of practicing with a group of musicians is far greater for me than practicing alone at home ,” he said. “Cooperation and exchanges with members, as well as advice from the conductor, have greatly enlightened me.” Besides acquiring team-building skills, Kim also treasures the chance afforded by joining the Orchestra to enrich his performance experience.

“As the Orchestra becomes more popular and famous, we have increasing opportunities to perform,” Richard added. In addition to its annual concerts and performing at CityU events, such as the annual Congregation, alumni activities, fund-raising activities and anniversary celebrations, the Orchestra also performs for other local educational and charity organizations. 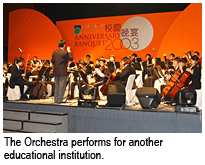 In addition to enhancing fellowship among students, alumni and staff, the Orchestra aims to promote classical music. To enhance cultural awareness on campus, the CityU Philharmonic Orchestra launched lessons on various instruments in September 2003. And, by performing on the mainland or overseas in the future, the CityU Orchestra plans to make its presence known outside .

The founder of the Orchestra, Mr Law Wing-kin, is grateful for the dedication of his successors who continue to live up to the Orchestra's mission and are raising the Orchestra to new heights. Mr Law, who graduated from CityU several years ago, is still an active member of the Orchestra. “My interest in music and my affiliation with the Orchestra give me the incentive to stay close to CityU,” Mr Law said. “The Orchestra is better than ever.” Mr Law also appreciates CityU's financial support of the Orchestra, the provisions of large instruments and a practice venue, and hiring of a conductor.

Kim, Richard and Karman will follow the example of Mr Law and play with the CityU Orchestra after they graduate. It is not only music they are enthusiastic about, but also affiliation with the Orchestra. “I hope to continue to take part in and witness the growth of the Orchestra three, five, even ten years down the road,” Richard said.