A celebration with international flavour

CityU's 20th Anniversary Celebration is nearly upon us. Preparation for this auspicious event is entering the final stages. The party with international flavour will be held on 20 December at the University Circle. 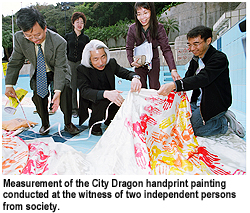 One of the numerous events and activities arranged this year in honour of the 20th anniversary is the largest handprint painting in the world, which took more than six months to produce with the participation of hundreds of students, staff and alumni. The painting is to enter the Guinness World Records. An important step for filing the Guinness World Records application for the City Dragon handprint painting is the official measurement of the piece. The University is required to have the measurement of the painting witnessed by two independent persons from society. Thus, on 14 December at noon, Mr Tam Kwok-kiu, MH, Chairman of Sham Sui Po District Council, and Mr Choi Kai-yan, CEO, People of Fortitude – International Mutual-aid Association for the Disabled, and Visual Arts Examiner of Hong Kong Arts Development Council, were invited to oversee the measuring 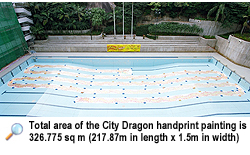 procedures. Under their close supervision, assisted by Students’ Union Chairman Mr Kelvin Chan along with colleagues from the Student Development Services and the Facilities Management Office, the measurement of the total area of the painting, which was placed on the floor of the University swimming pool, took about half-an-hour. The total area of the painting is 326.775 square meters (217.85 meters in length, times 1.5 meters in width), which exceeds the old World Record (of about 210 square meters) by more than 50%. The handprints were painted on five rolls of cloth, using nearly 20 lb of oil paint.

“This is a meaningful activity. I very much appreciate the creativity and vitality of CityU students, and the solidarity demonstrated by the University community,” said Mr Choi.

At the Anniversary Celebration, 70 students will take part in a dragon dance performance with the handprint painting, bringing the City Dragon to life! Participating students are now busy with rehearsals to give their best performance.

A special part of the day's programme is to be the multilingual greetings to CityU by a total of 20 invited students and staff from different countries who will be wearing their national costumes. One of the participating staff members, Dr Liliana Gratie, said she is delighted to represent her own country on this special occasion. Dr Gratie will use Romanian (a language rooted in Latin) to greet the University. “It’s a good and meaningful idea to gather members of the University community from different cultural backgrounds for the celebration,” said Australian Dr Desmond O’Toole. Other participants include people from the mainland, , , , , , India, Bangladesh, Austria, France, Belgium, Germany, Poland, Spain, Ireland, the , and the .  Together, they signify the rich cultural mix and global-oriented ambience of the CityU campus.

In addition, a light buffet will be available in the Multi-Purpose Hall. The menu includes Chinese fare, Western delicacies and Asian cuisine, including Japanese, Thai, Philippine, Vietnamese, and Indian  food, among others, all prepared elegantly. Of course, the big birthday cake specially produced for the anniversary party is bound to taste good.

Decoration of the dining hall will include an ice sculpture designed with the 20th Anniversary logo. The University circle has been decorated with ribbons. Stage design and other logistics are being finalized with care. A rehearsal is to be held on 19 December. Everything is being done to provide a pleasant environment with festivities for staff, students and guests to enjoy.