A feast of Ming and Qing paintings and calligraphy Fifty-six Ming and Qing Dynasty works of art and calligraphy from the are on display at the CityU Gallery from now to 15 December, offering the audience a visual treat to a rare, historical collection by renowned artists and scholars. Collaboration between the Chinese Civilisation Centre (CCIV) and the Shen Zhen Museum over the past year has culminated in this exhibition. “Our close ties with Shenzhen can be best manifested in such cultural and artistic exchanges. I have visited the Shen Zhen Museum several times and the exhibits on display are a key part of the thousand exquisite works at the Museum," said Professor Cheng Pai-kai, Director of the CCIV. "We are grateful for the launch of this exhibition and hope it will trigger more interest in Ming and Qing Dynasty art and calligraphy,” he said. 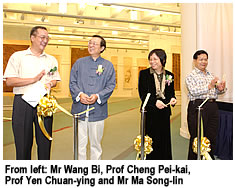 Professor Cheng expressed his sincere thanks for the success of the exhibition to: Mr Wang Bi, Curator and Research Fellow, Shen Zhen Museum; Professor Yen Chuan-ying, Research Fellow, Institute of History and Philology; and Mr Ma Song-lin of Bureau of Culture of Shenzhen Municipality, who were also officiating guests of the opening ceremony.

Viewers can immerse themselves in Ming and Qing Dynasty artists’ expressions of feeling in the forms of calligraphy and painting. Two large paintings on display are “Scholarly Gathering” and “Waterfall by the ”, both from the Ming period, showing the artists’ pursuit of their own ideal and imaginary worlds. Many of the paintings are works by artists from the

The Shen Ming and Qing Dynasty Paintings and Calligraphy , jointly organized by the CCIV and the , is open to the public, from now to 15 December, at the CityU Galley, 10am to 7pm daily.