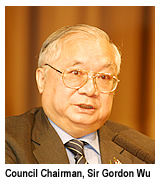 Sir Gordon Wu is to be awarded the Gold Bauhinia Star (GBS) for his distinguished service to Hong Kong. He has given valuable advice to the Government on ports planning and development, as well as on enhancing the attractiveness of Hong Kong as an international logistics and maritime centre. He has also offered constructive suggestions on enhancing Hong Kong's physical connectivity with the Pearl River Delta region, notably in supporting the construction of the Hong Kong-Zhuhai-Macao Bridge.

The Honourable Lau Ping-cheung is to be awarded the Silver Bauhinia Star for his contribution to local public affairs, promotion of professional services, both locally and globally, and nurturing a new generation of quality professionals.

Mr Vincent Chow, JP, is to be awarded the Bronze Bauhinia Star for his commitment and contribution to the development of the arts in Hong Kong, and steering the Governing Council of the incorporated Hong Kong Repertory Theatre. 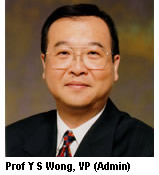 Professor Y S Wong, JP, is to be awarded the Bronze Bauhinia Star for his meritorious community service, particularly in taking the helm of the Curriculum Development Council to realize the aims of education for the 21st century in Hong Kong -- to develop and foster moral and civic education, as well as a sense of national identity among students.

The Chief Executive will confer awards to a total of 376 persons on this year's Honours List, including 15 Gold, 23 Silver and 63 Bronze Bauhinia Star recipients. The Presentation Ceremony is tentatively scheduled for October.