CityU President, Professor H K Chang, and Professor Zhu Qingshi, President of the University of Science and Technology of China (USTC), signed a Memorandum of Understanding, 13 June, to jointly establish a high level, joint research centre in . The Centre will advance CityU’s research base into the booming Yangtze River Delta environs, following the success of the University’s Shenzhen and Zhuhai Research Centres in the Pearl River Delta Region.

CityU and the USTC have established a good relationship and engaged in several academic exchanges over the past ten years. The two institutions entered into this mutually beneficial collaborative agreement to complement each other’s strengths, to work together on joint research projects, supervision / teaching of research students, and to furnish professional training opportunities. The universities will also make use of the development and commercial/industrial potential of city to proactively explore strategic collaboration in science/technology areas such as nano-technoloy, nano-materials, environmental science, information technology, engineering management, and applied mathematics, and business areas such as knowledge management and innovative management. A selection committee including representatives from both parties will be set up to examine joint project proposals. CityU’s Faculties of Business, and Science and Engineering, soon will discuss detailed plans with their counterparts in the USTC.

In his speech at the signing ceremony, Professor Chang cited two lines from a Chinese poem “Mooring by the Maple-Bridge at Night”:

Beyond the [] city walls, from 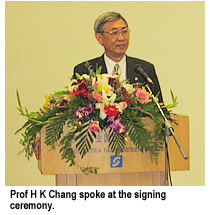 Professor Chang was impressed by the elegance of ; he also sensed the excitement of the swiftly modernizing and internationalizing city. In addition to CityU and USTC staff, Government officials of the Municipal and representatives also attended the signing ceremony. The Suzhou Municipal Government has provided USTC with land and related facilities, together with a 200 million RMB grant for campus and hostel buildings, plus a 46 million RMB grant for hardware and equipment.

Established by the Chinese Academy of Sciences (CAS), the USTC is among the top 10 mainland universities according to a survey conducted by the in 2003—the USTC ranked sixth in the entire Greater China area; CityU ranked seventh. The USTC has 24 CAS and Chinese Academy of Engineering (CAE) academicians, about 1,000 professors and associate professors, and a student body comprising 8,500 undergraduates and over 7,000 graduates. The USTC also ranks first on the number of research papers published with a high-impact factor among universities across the mainland. The USTC and CityU share a similar vision. As early as 1994, the two universities signed a number of institutional as well as departmental level cooperative agreements. In April this year, Professor Zhu paid CityU a visit and in May, CityU’s Deputy President, Professor David Tong, led a delegation of senior staff to the Suzhou Industrial Park (SIP) to study the Park’s development and environment. 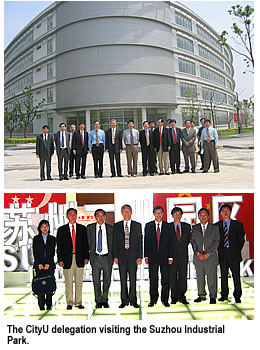 Suzhou has developed rapidly over the past decade. It is now an important industrial city in the Yangtze River Delta region. SIP is the largest cooperative project of the Chinese and the Singapore Governments, with an investment of over 30 billion RMB in its high-standard infrastructure. Economically, the Park is growing at an average annual rate of 50%. In 2003, the SIP’s domestic gross national income amounted to 36.5 billion RMB. The total administrative region of the SIP covers 260 sq. km, one-fifth of which will be allocated for establishing a “University City” – a conglomerate of branch offices of universities from the mainland and/or overseas.

CityU is responding proactively to the University Grants Committee’s urge for deep collaboration among higher education institutes. In addition to renewing an academic exchange agreement with the Zhejiang University and the signing of the Memorandum of Understanding this month, the University enjoys various other cooperative projects with mainland institutions and companies. For example:

l          The School of Law has a longstanding Agreement with Renmin University’s jointly running an LLM programme.

l          The Department of Manufacturing Engineering and Engineering Management has signed an agreement with the to launch an engineering management programme.

l          The Language Information Sciences Research Centre will sign an agreement with the Chinese Academy of Social Sciences for a new edition of the Language Atlas of China.

l          The School of Creative Media is entering into a “trilateral agreement” with the Beijing Film Academy and the of the University of Southern California, for promoting academic exchanges and deep collaboration.