CityU President Professor H K Chang and Deputy President Professor David Tong led a delegation of 13 staff members to Zhejiang University  in , 7 June, to renew the academic exchange agreement and to explore opportunities for multifaceted collaboration.  The delegation received a warm welcome from a group of 22 staff led by Professor Zhang Junsheng and Professor Pan Yunhe, Chancellor and President, respectively, of the .

Both parties expressed enthusiasm for potential collaboration in four major areas: knowledge and innovation management; communication/ journalism; wireless communications; and Chinese civilization. Senior staff members represented at the CityU delegation included Deans and Associate Deans from the Faculties and Schools, Heads of Departments, and Directors from the Chinese Civilisation Centre (CCIV) and External Liaison and Cooperation Office (ELCO). “One of the major objectives of the delegation is to explore Zhejiang University as a potential partner for multifaceted collaboration in the Yangtze River Delta, after the precedent of the Shanghai Jiao Tong University (SJTU),” said Professor Chang. 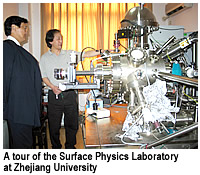 The University Grants Committee (UGC) has encouraged the University to “actively pursue deep collaboration in its areas of strength with other higher education institutions in , or the region, or more widely” in the new role statement given to CityU in January this year. In , a process of deep collaboration between CityU and PolyU has already started, with the formation of four working groups on engineering, taught postgraduate education, capital and facilities, and academic secretariat.    In the mainland, in response to an invitation extended by long-term partner SJTU, the President paid SJTU a visit at the end of March this year.

Zhejiang has a long-term friendship with CityU, dating back to 1997 when faculty members from both institutions began a series of academic exchanges and more than 30 visits.  The two universities signed the first institutional agreement on general academic exchange in mid 2001, which was just then renewed on 7 June this year. Both parties have also signed academic agreements on student exchange and joint research projects at the departmental/ college level, involving the departments of Biology and Chemistry, Economics and Finance, and the then College of Higher Vocational Studies. As many as 18 postgraduate students and seven research staff members at CityU hold prior academic qualifications obtained from . Its Chancellor Professor Zhang was also conferred Honorary Doctor of Science by CityU in 2003.

President Chang also delivered a speech on technology and humanities at the Y C Tang Student Centre, , packed with some 150 students. It marked the first of a series of public lectures by CityU academicians that ELCO launched on the mainland. “If you put your heart, even technological gadgets such as handsets could become tools of compassion.” The President opened his speech with reference to a device most familiar with young people, echoing the theme of “the more advanced the development in science and technology, the more the need for humanities and spiritual civilization for the nourishment of the human mind and soul”. His one hour lecture also covered his ideas on religion, soft power versus hard power, globalization and regionalization, individualism versus collectivism, inspiring enthusiastic response from students who raised questions on Chinese civilization and the cultural identities of the people in .

is one of the top comprehensive institutions of higher education in

, spanning a history of more than 100 hundred years. The present institution came into being after a merger of the former , Agricultural University and in 1998. The CityU delegation concluded its visit to Zhejiang with a tour of the Zijingang campus, a landmark project at which spearheads its development in the 21st century.