In recent decades, an upsurge of research interest in the importance of omega-3 fatty acids to the human body has spurred a new generation of health food products incorporated with these essential lipids. DHA, docosahexaenoic acid, one of the essential members of the omega-3 fatty acids family, has become synonymous with intelligence in people’s mind, thanks to widespread media coverage on the benefits of DHA on promoting the growth of brain tissues in babies and safeguarding cardiovascular health in adults. 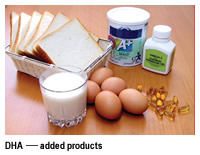 A wide array of DHA supplement capsules, smart bread, smart milk and omega eggs, which promise to raise smart kids and to prevent coronary diseases, have found their way to the market. Since scientists have confirmed that omega-3 fatty acids are vital to the normal functioning of our hearts and brains, and that deficiency in these essential lipids could lead to memory loss, learning difficulties, depression, high blood pressure, heart disease and even cancer, the prospects of DHA products look extremely promising.

Professor Lilian Vrijmoed, an academic in CityU’s Department of Biology and Chemistry, has tapped the highly promising DHA product market through a different route: enhancing the DHA content of animal feeds, which can then benefit the human body via the food chain.  “Fish oil is, at present, our main supply of omega-3 fatty acids. However, even fish such as salmon and tuna derive their essential lipids from marine microbes and algae. Like human beings, they cannot manufacture omega-3 fatty acids themselves; fish must obtain them through their food,” Professor Vrijmoed explained. 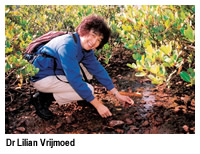 The idea of producing a DHA product dawned on Professor Vrijmoed when she was investigating mangrove fungi at Mai Po, , six to seven years ago. An expert on fungi of the marine environment, Professor Vrijmoed discovered a DHA-producing microbe, Schizochytrium mangrovei, on fallen senescent leaves of some mangrove plants. The high nutritive value of DHA prompted her to put the idea into action, which triggered a research project exploring the mangrove microbe in 1997.

Supported by a HK$ 300,000 Industrial and Business Development Grant offered by CityU in 2001, Professor Vrijmoed proceeded to extract the microbe from the mangrove leaves, identify the highest DHA producing strain among the pure isolates obtained from the mangrove, and enhance its DHA yield. To date, the highest yielding strain identified by Professor Vrijmoed produces approximately 200 mg of DHA per gram (freeze-dried weight) of microbial cells, after 72 hours of fermentation.

With increasing population and already experiencing an exhaustion of fishery resources in the ocean, it is expected that the supply of omega-3 fatty acids from fatty fish such as trout, mackerel, sardine, tuna and salmon will be inadequate to meet future demand due to worsening marine pollution. Marine microbes, such as the Schizochytrium mangrovei, with its capacity to produce high levels of DHA under controlled conditions, would thus provide an alternative and unlimited source of DHA supply. “Undoubtedly researchers are working on its industrial development,”said Professor Vrijmoed. “We have to act fast to capture the emerging market of this alternative source of DHA.”

“A DHA product in the form of an animal feed offers much faster entry into the market than making a product for human consumption,” according to Professor Vrijmoed. Numerous safety tests and a process as long as five or 10 years can be avoided. This ascertained, she created a DHA—added animal feed. She has now teamed up with a biochemist, Dr Cornel Verduyn of in , to monitor the growth effect of the DHA—added  animal feed on fish and shrimp. In , she has invited a local farmer to use the DHA-added animal feed to raise chickens, and to monitor the DHA content in their flesh and in their eggs.

The mangrove factor may prove pivotal. Professor Vrijmoed would like to see the project proceed to the next stage of technology transfer and large-scale marketing through an industrial partner. An ideal partner would be an animal feed producer interested in large-scale production of the DHA product.  Positive data from the feeding trials currently underway will help convince farmers that the product can add value to their farm produce.

This story appears in CityUToday Issue No. 1