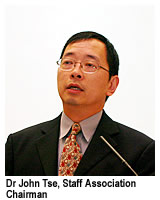 No more than 60 staff turned out at the Staff Association (SA) forum on the new salary proposals today. Familiar faces abounded at the occasion, voicing an array of usual concerns ranging from the necessity and effectiveness of the proposals to the level of staff morale at the University.

The forum was mainly divided into two parts: a report on a recent opinion survey on the new salary scales and pay raise system; and a blow-by-blow discussion of the Association’s position paper to the proposals. The forum was moderated by Dr John Tse, Staff Association Chairman.

About 300 staff, out of a total of 2,079, responded to the SA survey. A majority (81.9%) of the respondents would not accept the overall proposals, with an equally high proportion voicing their support for the Association’s other demands-- for example, assessments of the senior management, the setting up of a Remuneration Committee under the Council, and an open pledge by the University that no existing staff should be laid off or forced to be re-employed on the new scales. There were 13 questions in the survey, and one reported that the staff morale at the University was “low.”

The “discussion” on the position paper was a reiteration of the Association’s grievances. Among the more important ones were:

Participants also aired some concerns about “promotion means demotion in salary” under the new proposals and the likelihood that the career developments of many existing staff may have plateaued.

The Staff Association will present its position paper to the University Management next week.