Announced on , a team of students from the School of Law (SLW) was among the 28 teams from around 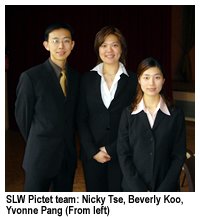 the world selected to participate in the English-speaking session of the prestigious Jean-Pictet Competition, 10-17 April, in . This year, there were 79 applications. The CityU team, comprising LLB students Beverly Koo, Yvonne Pang and Nicky Sai Hang Tse, were the first from China to take part in the Competition.

The CityU team put substantial time and effort into preparing the various application materials required by the Competition’s organizers, including essay answers to questions on international humanitarian law. The team was advised by the SLW’s Associate Professor Dr Stephen Hall and Visiting Assistant Professor Ms Dinusha Panditaratne. Although the CityU team did not reach the finals, they received some personal commendations from judges for their good performance during several stages of the competition.

“The competition was a tremendous experience for the students, where they were able to apply their knowledge of public international law and international humanitarian law and to learn from fellow competitors and judges,” Ms Panditaratne said. “The program was far more intense than most mooting and other law competitions.” The teams, including the 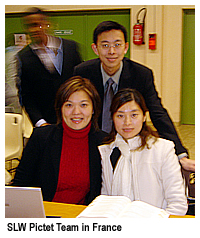 University of Cambridge, New York University and the Graduate Institute of International Studies in , were required to participate in simulated meetings of United Nations bodies, Red Cross agencies and other international organizations for four consecutive days from morning through early evening. The situations discussed during these meetings were frequently altered by the competition organizers and judges, in order to test the students’ ability to adapt to new information.

“The Jean-Pictet Competition was definitely an experience of a lifetime. It dramatically increased my awareness of international humanitarian issues, and reminded me that beyond the safe and luxurious society of Hong Kong which we take for granted, there is another world where real persons are facing atrocities unimaginable to us,” Yvonne commented enthusiastically. “The competitive yet friendly spirit of the competition also made the experience unforgettable.”

The Jean-Pictet Competition is held annually to promote knowledge of International Humanitarian Law (IHL), which is the law that regulates parties in war, or armed conflict. The Competition includes an English-speaking session and a French-speaking session and is held in a different location in either , or the each year. The 28 participating teams in each session of the Competition are selected on the basis of their knowledge of and demonstrated interest in international humanitarian law.

Born in in 1914, Jean Pictet graduated with a Doctor of Laws from the in 1955. He joined the International Committee of the Red Cross (ICRC) in 1937 and became secretary-jurist preparing the revision of the 1929 Geneva Conventions. He also led the preparation for the adoption, in 1949, of the four Geneva Conventions for the protection of the victims of war. The “Jean Pictet Concours” celebrates the importance of IHL. Pictet passed away in 2002.