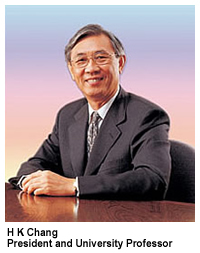 At the end of March, I led a CityU delegation to . The visit came in response to an invitation extended to us in 2002 from Shanghai Jiao Tong University (SJTU). It was delayed due to SARS and other circumstances last year. The trip proved to be both inspiring and sobering.

Within the last two or three years, has become even more dazzling. It is more cosmopolitan in outlook and its citizens are definitely more affluent than before.

Let me digress a little, now, and offer some personal observations. I first visited SJTU as a schoolboy in 1948, when an uncle was their Professor of Metallurgical Engineering on the Xujiahui campus, towards the west of the downtown area. In the 1950s, the bulk of the University, including my uncle’s department, was moved to , resulting in the now well-known Xi’an Jiao Tong University. While still teaching in US, I visited SJTU several times during the 1970s and 1980s, when it underwent a period of revival and expansion. During that time, SJTU acquired a new campus in the Minhang area, on the outskirts of . New buildings were constructed, and new disciplines were introduced, such as business management and biomedical engineering, my own specialization. Nonetheless, SJTU was still a far cry from the major North American universities where I taught, in physical scale or intellectual rigor.

In 1997, I made an official visit to SJTU as CityU’s President. Already with an impressive campus in the Minhang district, SJTU had begun to acquire another large tract of land nearby to meet its future expansion needs. I was struck by the University’s vision and achievements. It was also during this period that CityU established its first collaborative ties with SJTU, most notably in the form of a joint MBA programme. Then, three years ago, on another visit to SJTU, we laid out a collaboration plan, building on our complementary strengths. The intention was sincere, the conditions were nearly ripe. No firm agreement was reached at that time, however. Nevertheless, we maintained a very productive cooperation, including their helping us identify and training over scholarship recipients.

In the trip last month, we observed that SJTU has taken yet another big leap towards becoming a truly great institution. Not only have more new buildings been erected, they have also recruited many newly returned Chinese scholars from foreign countries. There was a palpable intellectual atmosphere on campus. Almost all major universities in the world are considering some kind of collaboration and exchange with SJTU. Because of our long-term partnership, we were most courteously received. I described to the SJTU senior management and academics CityU’s admiration and high hopes for deepening collaboration. Yet we would be pragmatic on what would be desirable and achievable. The SJTU top management, equally pragmatic, told us frankly the specific areas they would to work with us. The prospects look promising and the details will have to be worked out later.

This trip was sobering, because we began to realize that the relative strengths of CityU and SJTU have undergone changes in the past seven years. The higher education landscape on the mainland as a whole has changed rapidly. Since 2002, while we occupied ourselves with the tumultuous issues of budget cuts, etc., the tertiary sector on the mainland in general and SJTU in particular have zoomed ahead into a diverse and multifaceted, growing enterprise. The sector now comprises a range of selective centrally-supported universities, provincial universities, joint colleges with overseas partners and private institutions. All these bode well for and for the improvement of the overall quality of life of the Chinese people.

Frankly, SJTU has grown at a faster pace than we at CityU have in the past few years. Our sister institution in made no secret about its aspirations to become one of the world’s leading institutions in the next two decades. This should not discourage us because we have made our own progress as well. We still have advantages that institutions in or elsewhere on the Mainland cannot easily match and they know it. We must look carefully at how and what we can cooperate with them. We need to gain a thorough understanding of the situation if we make our own mark in the expansive that is embarking on a peaceful rise. What I hope most for CityU is to be part of this peaceful rise. If we either over-estimate our strengths or underestimate our advantages, we will simply miss out on this historic event and also fail to achieve our aspiration to be recognized as a leading institution in the Asia-Pacific region.