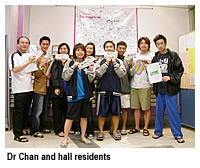 Students are responding to the University’s call for donations. In early April, hall residents launched a hostel-wide fundraising campaign to rally support for the cause. “We know that the University is facing financial challenges,” said Christina Foo, a resident of the HSBC Prosperity Hall, who helped initiate the fundraising idea.  “As students and hall residents, we have always been on the receiving end; now, inspired by the ongoing faculty giving campaign on campus, it is time for us to give.”

HSBC Prosperity Hall Residence Master Dr Raymond Chan embraced the idea and helped expand the initiative into a hostel-wide campaign, coordinating support from Student Development Services and the Development and Alumni Relations Office. “It is a good opportunity to unite all the hall residents in a common cause,” Dr Chan explained. All the halls on Cornwall Street, along with the To Yuen Building and the Jockey Club House joined the campaign.

The organizers have issued some 900 tickets, each at HK$10,  for sale among the residents. Each hall coordinates its own promotional efforts. Ticket holders enter into a lucky draw in which they may win books donated by the University’s senior staff. The money generated goes into the Student Support Fund. 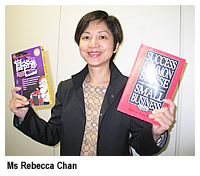 In turn, Student Development Services sent an email message on 2 April to some 400 senior academic and administrative staff calling for book donations. “We take this opportunity to promote reading among students, in addition to supporting the cause,” said Ms Rebecca Chan, Senior Student Development Officer, coordinating the book donation campaign. Donors are asked to sign and to write words of encouragement in the books. Response has been enthusiastic. Several staff donated more than five books, contributing titles such as Rich Dad, Poor Dad; Sophie’s World, and The Unbearable Lightness of Being. One person donated nine books in total, autographing each. The lucky draw will be conducted on 20 April.

Donation: where we stand