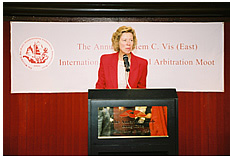 In the first ever Willem C. Vis (East) International Commercial Arbitration Moot, hosted by CityU's School of Law (SLW) 18-21 March, Tsinghua University (Beijing) triumphed over the other 13 participating teams from universities around the world. "Thanks to all of you who helped start a tradition that will provide a continuing and ready reference to City University as the arbitration school of the region," concluded Vis (East) Director Ms Louise Barrington.

The three-day competition, launched with cocktails on 18 March, culminated in an Awards Gala at the American Club, in Central, 21 March. The goal of the annual competition, open to law students across the globe, is to foster the study of international commercial law and arbitration for the resolution of international business disputes. The Willem C. Vis (East) Moot in Hong Kong runs in parallel with the original Willem C. Vis Moot, started in 1993 and held in Vienna.

"All the team members have honoured themselves and their schools with their excellent efforts," Ms Barrington observed in her closing remarks at the Awards Gala. "Through this competition, you have learned a lot, not only about the CISG (The United Nations Convention on Contracts for the International Sale of Goods), but also about each other and yourselves, not to mention how to deal with the occasional irascible arbitrator." 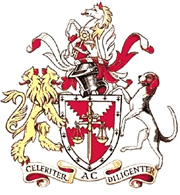 "The Chartered Institute of Arbitrators and City University have joined forces to create a unique educational and social experience which will have positive repercussions for years after everyone has returned to their homes. A hundred visitors from as far away as Chicago and Munich and Sydney came to City U, sampled the University's impressive facilities and felt the magic of the Moot," she noted. Less than 24 hours later, SLW Associate Professor Dr Bryan Bachner reported an enquiry from one of the students interested in the Global Gateway LLM programme Ms Barrington said.

"The competition allowed the school to showcase its facilities and Hong Kong's sophistication, and the students loved it. The Moot brought together students, coaches and professional arbitrators in a unique setting. Everyone present was aware of the team-building aspect of the Moot¡Xnot only among the members of each school group, but also among the arbitration community at large. People who had never heard of City U, or who had only heard of it as an alternative for students who couldn't make it into Hong Kong U, now will think first of City U when they think of arbitration and international law," she added.

At noon on Sunday, before an audience of over 100 law students, practitioners, professors and their guests in the Hunter Room of the Hong Kong International Arbitration Centre (HKIAC), Tsinghua University narrowly edged out Loyola University Chicago in the Finals of the Vis (East) oral arguments. Tsinghua prevailed before a distinguished tribunal chaired by the President of the Bar Association of India Mr Fali Nariman, along with Chairman of the HKIAC Mr Neil Kaplan and SLW (Chair) Professor Peter Malanczuk, to win the David Hunter Award.

"Our own Vis Moot team is also gearing up to take part for the fourth time in the Vis competition in Vienna. Meanwhile, by hosting this competition, CityU is projecting its name beyond Hong Kong's borders more effectively than ever," SLW Associate Professor Mr Tony Upham, commented. "Our hospitality has attracted teams from a number of different universities in the South-East Asia region."

"These students and those accompanying them have forged meaningful friendships based on the common experience of the Moot's 'trial by ordeal'. They worked hard, played hard, laughed and even cried. The bonds forged during the competition will grow to create a network that is both professional and personal," Ms Barrington observed. "The Vis (East) is a giant step in developing a solid partnership between educators and professionals."

Hong Kong's future in arbitrating international disputes is particularly promising. In Asia, Hong Kong probably handles the largest number of cases in which neither party is local. In the Hong Kong Trader of 8 March, HKIAC Secretary General Mr Christopher To noted, "Increasingly, we see that parties with no connection to Hong Kong are choosing us as a venue for arbitrating their contract disputes... More and more, we find that people are realising, when it comes to choosing the right venue for arbitration, Hong Kong really does have it all." According to HKIAC statistics, 320 arbitrations were carried out under the umbrella of the HKIAC in 2002; 59% of these dealt with commercial disputes.

According to Hong Kong's Secretary for Justice Ms Elsie Leung, Hong Kong has a system appropriate for international arbitration; some of Hong Kong's advantages as a centre for international arbitration are its geographic location, efficient transport system, accommodations, and an updated Arbitration Ordinance. At the opening of the Law and Language in International Arbitration Conference held in October 2003 at CityU, Ms Leung pointed out that Hong Kong's arbitral awards can be enforced in all jurisdictions adhering to the New York Convention on the Recognition and Enforcement of Foreign Arbitral Awards, including mainland China.

Hong Kong's potential as a regional centre for international arbitration is strongly supported by the local legal and business community. In addition to the Chartered Institute of Arbitrators (East Asia Branch) and CityU, the first annual Vis (East) was supported by the United Nations Commission on International Trade Law (UNCITRAL), the International Chamber of Commerce, China International Economic and Trade Arbitration Commission (CIETAC), the Law Association for Asia and the Pacific (LAWASIA), a number of law firms including Baker & McKenzie, Deacons and Lovells, and companies such as Crown Worldwide.