Goth on a shoestring -- Suspense thriller premiers on campus

Assistant Professor Mr Julian Lee, of the School of Creative Media(SCM), has produced Night Corridor, an independent film with a shoestring budget of about HK$3 million. Committing themselves as pre-professional film workers, six creative media students got a first taste of how a film project runs in the real world. Mr Lee deemed this a precious chance for them to learn through the production process.

Winning the Large Scale Film Grant from Hong Kong Arts Development Council encouraged Mr Lee to make the movie. "With the story published five years ago, it's been my dream to dramatize my text on screen," Mr Lee said. 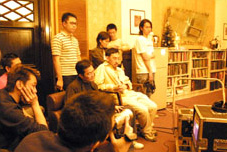 Night Corridor is a gothic tale about an artist investigating his twin brother's death, involving rabid monkeys, and culminating in a series of grisly murders.

Mr Lee feels that the most unforgettable moment was a shooting session at 3 a.m. one winter morning at CityU. "It rained, and we were cold. I was nervous as well because we had to shoot all the night scenes within three hours in order to fit our tight budget." He maintains that the students gained a lot from this project as they worked with an outstanding 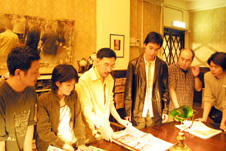 production team in Hong Kong. "This was a rare chance for them to take part in a serious production. And I believe learning cannot succeed if you never go through the process," Mr Lee commented.

"It's really an eye-opening and exciting experience to understand how a professional team controls lighting and creates appropriate mood for different scenes," said Tsang Chor-sun , one of the six students on Mr Lee's project. 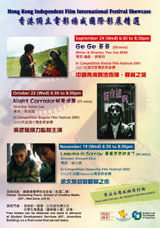 Night Corridor will be shown at the SCM Screening Room 22 October at 6:30pm, as part of the Independent Film Showcase co-organized by the Cultural and Sports Committee and SCM. Free tickets can be obtained starting 15 October at the Student Development Services front desk. For more details about the Festival Showcase, please browse www.cityu.edu.hk/ctspc/ or call 2788 8111.