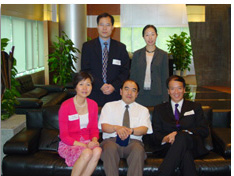 On the morning of 3 September, in the Multi-media Conference Room, CityU President, Professor H K Chang, Mr James Ng , Director of the Office of CityU Extension, and other staff members welcomed a team of special guests — Delegation from the People's Municipal Government of Harbin.

"Harbin is a vital city that shares many qualities with Hong Kong in terms of foreign exchange. I hope this interchange will accelerate the economic, cultural and other exchanges between the two cities," Professor Chang said. "We can say that this delegation is the first from the mainland since Premier Wen Jiabao's visit to Hong Kong in June. CityU hopes to develop friendships with cities in the mainland, and to furnish them with all-round graduates.

"The delegation leader, Deputy Secretary General and General Office Director of the Harbin Government, Mr Zhan Laiyin said it was good opportunity for them to visit CityU. "In order to adapt to the development of a market economy, the mainland is carrying out reforms in administration, audit systems and other areas. We hope to get to know the open, highly efficient administration methods of the HKSAR government during this trip. At the same, we wish to foster our cooperation with Hong Kong by integrating the teaching and research advantages of CityU with the industrial and geographic power of Harbin." 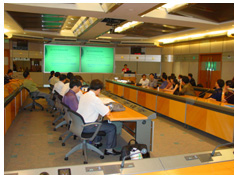 One week later, Mr Liang Sanji, a member of the delegation, accepted a Lecture-Attending Certificate for the delegation. Although the training lasted only one week, the Director of this program, Mr Caesar Lun , Assistant Professor in the Department of Chinese, Translation and Linguistics and Managing Director of the Lang Comp Company Limited, an affiliated company of CityU, thinks it has already achieved the desired results. "Lectures by CityU's renowned professors and visits to the Legislative Council Secretariat, and the Independent Commission Against Corruption (ICAC), etc., have helped officials from Harbin understand how Hong Kong's government, industrial and business sections work," said Mr Lun. " I hope this training can integrate research institutions and governmental organizations. Hopefully the productivity of society will be boosted through collaboration with the government. I am looking forward to further cooperation of our company with Harbin."

Mr Zhan is satisfied with the study. "All of us have benefited a lot. I have seen how dynamic CityU is with my own eyes: teaching and research are closely integrated, and technological achievements are commercialized through CityU affiliated companies," Mr Zhan added. " The lectures this week touched upon legal systems, industrial and business management, social issues and many other subjects. CityU's professors are skillful at applying theories to the real situation in the Hong Kong society. Although we are from different sections of the government, the courses made us feel more confident with our future work."

Mr Tong Yan , another delegation member, also thinks this week's study in CityU will be beneficial to his future work. He mentioned the Efficiency Unit of the Chief Secretary for Administration's Office, HKSAR as he thinks it can effectively boost the development of the economy. "CityU's professors know how the government works. I was really impressed," he said.

The delegation returned to Harbin after a visit to the Exhibition Center of the Hong Kong Housing Authority.