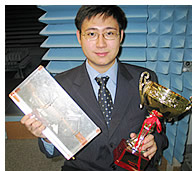 A base station antenna project presented by Mr Steven Yang at the Institution of Electrical Engineers in Hong Kong (IEE) in the Young Members Section (YMS), on 27 July, has won him the championship in the undergraduate category. Other CityU students who received prizes in the event include Mr Liu Yang Fan and Mr Kenji Yum, who clinched the championship in the postgraduate division with their group project on compact microstrip resonant cells. Mr Francis Kwong was the first runner-up.

Yang, a CityU electronic engineering student, worked on an L-shaped probe patch antenna-a patented product by Professor Luk Kwai-man of the Department of Electronic Engineering (EE). Yang added an innovation, combining a hexagonal patch with the antenna, thus expanding the bandwidth to support third-generation (3G), as well as Personal Communication Service (PCS) and Code Division Multiple Access (CDMA). Besides its triple-band feature, this novel antenna can be fixed to walls, a position conducive to better signal transmission than the conventional slanting position, according to Yang.

"It is a remarkable breakthrough Steven has achieved," said Professor Luk who has inspired and guided the budding engineer. Professor Luk will soon modify the prize-winning gadget into an electronically tuned base station antenna array, to make it a major product for Yantai Hi-Gain Hi-Tech Company, a CityU startup established in Shandong province. The company's technology platform is based on Professor Luk's patented L-shaped probe patch antenna.

A top EE student who just completed his undergraduate programme this summer with a 3.95 GPA, Yang has decided to further his research study at CityU, under the supervision of Professor Luk. "Fascinated by electronic home appliances at an early age, I have always wanted to become an electronic engineer," said Yang, "I find CityU an ideal training ground to nurture my aspirations." At the University's Wireless Communication Research Centre, not only did he find advanced technology that facilitated his research, but also support and inspiration from professors who are experts in their fields.

The IEE championship marks the second time Yang has triumphed in public contests. Last year, he won a gold award in a contest co-sponsored by Ericsson and Smartone, with his School Announcement System, based on a project of another EE Associate Professor, Dr K F Tsang. He also joined the Industrial Attachment Scheme (IAS) last summer, employed at Honeywell, in Shenzhen, where he was assigned to work on a bluetooth project-a stimulating learning experience. "There are a lot of opportunities at CityU that lead me closer to reaching my career goal of becoming a chartered engineer." Yang is well on his way.