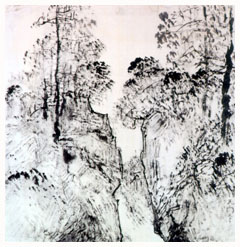 "Representing Cosmic Energy", a collection of artworks by Mr Yang Shanshen, master of the Lingnan style of painting, is now on display at the until 30 September. The exhibition's organizer, Professor Cheng Pei-kai, Director of CityU's Chinese Civilisation Centre, says the title is made up of the keywords to an understanding of Yang's aesthetic world. "All events hail from 'zong', the origin, which is the self of the artist at the moment of grasping the primordial 'qi' (energy) that comprises all," Professor Cheng writes of the spiritual essence of the master's works in his introduction to the exhibition.

Mr Yang survives three other second generation representatives (Mr Zhao Shao'ang, Mr Guan Shanyue and Mr Li Xiongcai) of the Lingnan school, known for its distinctive, Cantonese style. Now in his nineties, Mr Yang's unique art still makes waves. "His style and subjects, while retaining the East-West mix inherent in the Lingnan spirit, embrace both the intellectual pursuit of the scholar and the rendering of nature by the painter, " said Professor Cheng. "Beyond the customary studies of flowers, animals, birds, insects and fish, he treads a new path in landscape painting that is at once open and pioneering." 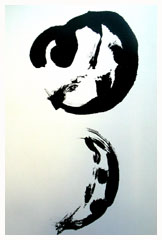 "Lingnan School painting" emerged as the most prominent school in the region of in the late nineteenth century and achieved national recognition at the beginning of the twentieth century. Parallel with the political turmoil of the period, the first generation of artists, represented by Mr Gao Jianfu and his followers, was directly involved in revolutionary activities led by Mr Sun Yat-sen. The school sought a revolution in traditional Chinese painting using elements from Western and Japanese art. The subjects were mainly strong and forceful creatures, such as galloping horses, and flying eagles, instead of the holistic landscapes of traditional Chinese painting. In regard to the later works of Yang, which depict more tranquil landscapes and human figures, Professor Cheng poses the question, "Could this possibly portend the return of peace to the Chinese soul?"

Yang reveals his belief in creating his own art of calligraphy in the last lines of a poem: "The self must emanate from one's own mind; Never to follow the footsteps of others." Equipped with the rustic brushstrokes of the Lingnan tradition, Yang's calligraphy has its own waywardness too.

Kicking off the exhibition on 29 July, CityU President Professor H K Chang referred the collection as "a feast for the soul". Other officiating guests included Deputy Chairman of PCCW Mr Linus Cheung Wing Lam, an admirer of Yang's art, and Mr Frankie To Wai, a collector who loaned pieces to the exhibition. Thanks to contributions from eight other collectors and galleries, visitors to the exhibition will be privileged to view many of Yang's works of art on public display for the first time.