He said, over the past two to three years, the University: 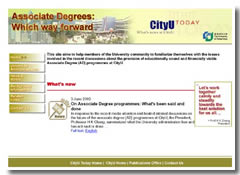 Professor Chang reiterated that all existing AD programmes would continue to receive the University's attention and support. Past and future AD graduates, including those from academic programmes affected by the UGC's "phase-out" policy will continue to be fully recognized for their academic qualifications and achievements. Meanwhile, the University, under the guidance of the soon-to-be set up Council's Working Group and on the advice of the Senate, will work with various stakeholders to delineate the parameters for future AD programmes on an educationally sound and financially viable basis.

This clarification came a few days after 27 May, when the Senate Meeting resolved to postpone deliberations on AD programmes to its next scheduled meeting in October. This decision was taken, in the hope of giving concerned College colleagues a chance to articulate their plans for the programmes affected by the UGC funding withdrawal policy and to let other Senate members familiarize themselves with the issues.

Commenting on the Senate resolution, Professor Chang said, "I believe a dual voice has spoken among staff. In the end, Senate's decision-making process has prevailed and a confrontation has been effectively avoided." He called upon all staff and students to set aside differences in opinion, and to work together calmly and steadily towards the best solution.

Two days later, the Council Executive Committee paid heed to the sentiments of the affected staff at the College and discussed the future provision for AD programmes at the University. The Committee agreed to recommend to the full Council, as proposed by the President, that a working group be established by Council to examine the financial viability of offering self-financing programmes. The Committee proposes that the Working Group should comprise seven members:

The recommendation will be put to the next meeting of the Council on 23 June.

Meanwhile, the University is committed to communicating with staff on the issues involved and a special corner has been set up within the CityU Today website for this purpose.