Self-realization in brushwork and strokes 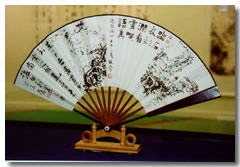 What's the relationship between Chinese calligraphy, seal engraving, and painting? An exhibition of Mr Ou Da-wei's latest works, "Realm of Black and Red: Works of Ou Da Wei" at the CityU Gallery, provides some answers. Organized by the Chinese Civilization Centre, the exhibition runs from 14 March to 31 May.

Painting and calligraphy, which are composed of dots and lines, share the same source of origin. Seal engraving, an art that integrates calligraphy, engraving and design in a limited space, shares the same medium of expression with calligraphyNthat is, characters. "There is no rule that one must be talented in all three Chinese arts but good calligraphic skills facilitate the creation of good seal engraving works and help the manipulation of lines in paintings," said Mr Ou.

Mr Ou began learning calligraphy from the famous calligrapher and seal engraver Mr Wu Zi-fu when he was 14 years old. Six years later, he started studying seal engraving with Mr Wu and three years after that he set himself the task of learning to paint on his own. From then on, he was married to the three Chinese arts and has spent more than 40 years perfecting his techniques. Mr Ou is not only skilled in the three arts, but has also developed a unique personal style.

The exhibits at the CityU Gallery are mainly large works, ranging from six to eight feet. The paintings are all black and white landscape paintings, with the exception of one colour landscape painting. Most of the calligraphy works are written using straw brushes. The uniqueness of a straw brush lies in the white strokes it produces between lines, which exude a sense of tragedy, freedom and the vicissitudes of life that are different from those produced by a traditional brush. The seal engraving exhibits reveal Mr Ou's attitude towards life through his particular seal script design and sophisticated carving skills.

"I am someone who cannot stop creating. Creative work is my life," Mr Ou explained. "The joy I gain from the creative process and the completion of a good piece of work gives me the impetus to keep on creating." As long as one possesses a "free heart", one can be creative, he said. If one is preoccupied with the worries and mundanity of life, creativity will be impaired. The two engraved seals "Engaged in an under-rated hobby" and "Content" vividly reflect Mr Ou's attitude to life.

Mr Ou's philosophy, goals and attitude to life provide the impetus for his creativity. His works are all about his daily life and reflect his deepest feelings. Mr Ou also likes to express his feelings through poetry and the exhibition showcases some of his recent poems, which are about his teaching experiences, his feeling of being surrounded by inquisitive students, visits from old friends abroad, his feelings when standing on top of Huang Shan ( ) and some self-reflective poems. The title of the exhibition, "Realm of Black and Red" is borrowed from his poem, "Paintings, engravings and calligraphy, close to black ink and close to red paint". Mr Ou said, "Seal engravings are usually expressed in red, while calligraphy and paintings are expressed in black, so I choose "realm of black and red" as the title." 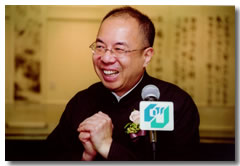 In addition to dedicating himself to creative art, Mr Ou is also active in promoting the arts in . At the opening ceremony, Professor Y S Wong, Vice-President (Administration), commended Mr Ou for his contribution to arts education. Mr Ou is currently a Visiting Artist in the Chinese Civilisation Centre, where he runs a workshop on learning about seal engraving.

With all the analyses and descriptions of Mr Ou's works, how does he himself perceive his creations? "They are true," he said. "From my works, you can see me, the real me." He is true to his beliefs in the way he lives and works. "I create with my true heart," he said.