Onto the real world: the Chongqing internship programme 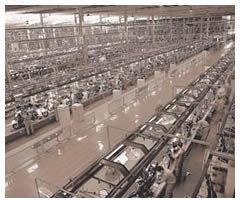 "With ties between Hong Kong and the mainland growing every year, understanding the mainland business world will certainly help our career development, no matter what we do or where we work in the future," said Ms Emily Lui, a third-year student in the Department of Management Sciences. Ms Lui, who recently returned from an internship programme held during the winter term break in Chongqing, China's fourth municipality, will graduate this year. "I wanted to take advantage of the opportunity CityU offered to us, so that I could have the experience of working in China," she added.

Out-of-classroom learning experenice has become increasingly important to university students as they prepare for their careers in a hyper-competitive workplace. Recognizing the trend, City University has been active in building such experiences into our students' whole-person development. From 23 December 2002 to 11 January 2003, 17 CityU students attended the Chongqing internship programme organized by the Career Centre in the University's Student Development Services (SDS). The programme, the fourth of its kind since 2000, was planned and conducted by Mr Rock Tam and Ms Cherry Lum , both Senior Counsellors in the Centre.

The programme was hosted by China's Zongshen Group, a major motorcycle and engine manufacturer, producing, among other things, about 1.5 million motorcycles a year. With around 18,000 employees, it is one of the country's fastest growing private enterprises.

"The opening up of the west has been one of our country's most important issues. We're delighted that our students had the chance to visit Sichuan Province to experience for themselves the region's economic development and culture," said Mr Tam.

Of the 17 students, 14 were from the Faculty of Business, and three from the Faculty of Humanities and Social Sciences; 15 of them will graduate this summer. To help the students get the best from their internship, SDS counsellors conducted three training workshops before the trip. Discussions were also held most evenings during their stay in Chongqing. The key concern, according to trip leader Ms Lum, was to make the students understand that employers are not teachers. "The most important thing I wanted students to learn was to take the initiative, not only to find work to do but to convince their employers to give them work." 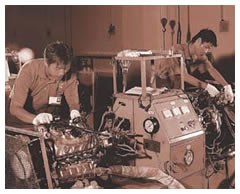 The students were assigned to a variety of tasks in such departments as Production Management, Logistics Management, Human Resources, Customer Services, Technology and the Capital Investment and CEO's Office. Apart from office work, the students had to choose a job-related topic for their internship reports, which they later presented to the Zongshen Group. Bulletin talked to three students about their Chongqing experience.

Ms Wong, a finance major, worked in the Capital Investment Office. The department's major task was to identify prospective investment projects that would allow the Zongshen Group to diversify its business. During her internship, Ms Wong was involved in the setting up of the Chongqing Zongshen Junhui Bio-Technology Company, a new initiative financed by the Zongshen Group and an outside partner. It plans to specialize in the transforming of pigskin into artificial human skin, which could be used for such purposes as treating burn patients. Ms Wong's supervisor asked her to go through an assessment report and comment on the project. 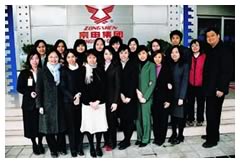 "In the beginning I was truly lost, as I knew nothing about biotechnology," recalled Ms Wong. Fortunately, the trip counsellor often reminded the students to ask themselves "what we can do for the company," rather than "what the company can do for us." Ms Wong came up with an idea that will certainly contribute to the company and also help her complete her assignment. "The assessment report they showed me was detailed and exhaustive," said Ms Wong. "However, they focused mostly on China's mainland and ignored the overseas market. So I offered to do some research on the overseas market for them." Working on the Internet, she researched the world's leading artificial skin companies, their products and uses, and the manufacturing and selling of them. She then compiled a summary in Chinese for Zongshen's reference.

Ms Lum, her counseller, also quickly got hold of a lengthy report of a Hong Kong-listed bio-tech company. "It helped me a great deal in understanding the structure and risks of such companies. With that additional background, I finally managed to finish my report."

Ms Wong is interested in becoming a credit analyst. "Because of the internship, not only have I learned a lot about pigskin and artificial skin, I also have a better sense of what an analyst's job is like," she said. 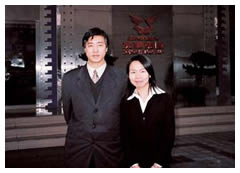 Juliana Koon didn't sleep well the nights before the group set out for Chongqing. The thought of working in a noisy and dark motorcycle factory was worrying her. Happily, the Zongshen Group's office was quite modern. She worked in a section that was bright and equipped with computers.

Although her major is China business, Ms Koon was sent to work in the Human Resources Department because she was once an intern in a headhunting company. A survey was being conducted at the time, to understand the employees' workloads and the distribution of work among the many departments in head office. Ms Koon was assigned by Mr Tian Yi, Director of the Human Resources Department, to analyze the design of the questionnaire, the survey results and the general personnel arrangements of the Zongshen Group.

Ms Koon soon had a good grasp of her task. She had just finished a course on marketing research, which covered how to design a questionnaire and how to conduct a survey effectively. It was, however, just before Chinese New Year when the questionnaires went out and almost every department was loaded with work. "I got fewer than 30 questionnaires back and was forced to give up some planned angles because of the lack of data." Because of this, she focused on a qualitative rather than a quantitative analysis. 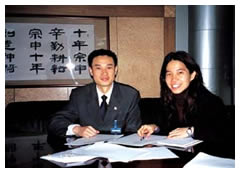 In the end, Ms Koon compiled an 11-page report, complete with charts. In the report, she looked into three key areas: recruitment, individual tasks, and the coordination between tasks, incorporating an analysis and suggestions. Mr Tian was impressed with the results. "Our original intention with this survey was simply to understand each employee's work load. I didn't expect that Ms Koon would raise it to such a high level and come up with an overall strategy for the allocation of work across departments," he said. "It was truly enlightening for us, revealing the lack of holistic planning on our management side." Given the same constraints of time and resources, he said he would be surprised if a mainland university student would do as well.

"Although Ms Koon is not a human resources major, she succeeded in adapting what she learned from her marketing research studies to tackle our human resources issues," said Mr Tian. "This makes me realize that when we're hiring in future, we don't always have to focus only on candidates' academic backgrounds. Sometimes making personnel arrangements that transcend their backgrounds can create more room for innovation."

Anticipating a prosperous future for China after it joined the World Trade Organization, Jackson Mok attended the Beijing Internship Programme organized by the Career Centre in the summer of 2002. "Beijing made me realize that each city has its unique culture," said Mr Mok, a third-year student majoring in quantitative analysis for business. "Plus, I've always aspired to develop my career in the mainland. And, the opening up of China's west is such a hot topicÉ" Such were the considerations that brought Mr Mok to Chongqing after Beijing. 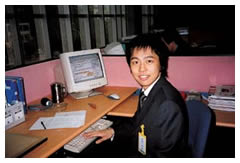 Working in the Zongshen Group's Costing Department, his main task was to look into the differences between the motorcycle factory's production and the number of motorcycles it kept in stock. Zongshen has adopted the "just-in-time" model for its production-that is, the company only produces enough motorcycles to meet its orders. "If production is well planned, there shouldn't be a lot of motorcycles in stock. My supervisor asked me to review the differences between production and stock and find a way to minimize the gap," Mr Mok said. With help from his supervisor, he first visited the warehouse and the production line to get an understanding of the production process. Then he interviewed the relevant department heads to get a better understanding of the structure of the departments and how they work together. Once Mr Mok grasped the entire process, from receiving orders to delivering goods to clients, he spotted a significant deviation between production and stock. Employing the "moving average" approach he had learned in his business forecasting class, he predicted the quantity the company should produce and the quantity that would be sold in the months to come. This approach proved effective. "When I informed my supervisor about the results, he said that Zongshen was already considering implementing some of the suggestions I made in my report. I was very happy to be able to apply what I'd learned in school to the real world of work," Mr Mok said.

Thanks to the two mainland internship programmes, he has increased his knowledge of logistics, which he is now interested in pursuing as a career possibility. "My university life has, indeed, been rich. Not only has it given me the opportunity to experience both Oriental and Western culture, it has also laid a solid foundation for my future career development," said Mr Mok, who studied in Copenhagen, Denmark, as an exchange student in 2001.

At the end of the three-week internship programme, a group of Zongshen supervisors had a sharing session with the students. Mr Tian told them that a university is the best incubator for developing talent. It was to Zongshen's benefit to keep abreast of the relative strengths of university students in the mainland and Hong Kong. "CityU is doing very well in helping students thrive in the workplace," he said. "The curriculum tends to be market-oriented and the University encourages students to work in the real world. This helps students adjust to the work environment smoothly and learn how to take the initiative."

CityU's Career Centre has organized four mainland internship programmes since 2000, with a total of 120 students participating. In addition, the Centre has also helped some 200 CityU students participate in the Hong Kong Jockey Club's Summer Internship Programme for Tertiary Students in Hong Kong. "It was really rewarding to see the way our students impressed their employers," said Mr Tam. "It's all about helping our students become winners in the real world of work."