In his usual reflective style, the President, Professor H K Chang, began his monthly chat with Linkage, an update on the impending budgetary turmoil (see Linkage 219 and 220), with an observation steeped in history and irony.

Ten years ago, most people worried about whether the novel "one-country, two-systems" concept could work. Few had any doubts about 's economic prospects after 1997. Today, with the political system already well-established and "one country, two systems" in place for six years, it is the state of the economy that has continually sapped our common confidence in a brighter tomorrow.

Five years ago, few of us would have predicted that the Government would be running such a huge fiscal deficit, Professor Chang said, and even fewer would have foreseen a cut in funding for higher education as traumatic as we encounter today. What was certain, as at 24 March, when the interview took place, was the determination of the University Grants Committee (UGC), made public on numerous occasions, to withdraw support for associate degree and taught master's degree programmes. What remains unclear, though, is the exact magnitude of such proposed rollbacks and the timeframe in which these targets have to be fully met. 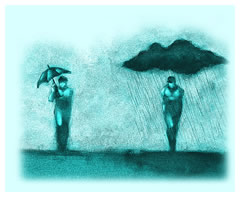 Under such a cloud of giddy unpredictability, he said, there are nevertheless several developments that now appear to be beyond reasonable doubt. First, as laid out in the Sutherland Report on higher education reform, the UGC will basically pull out of the associate degree business, but some programmes that can demonstrate their exceptional value to the community could still be kept alive with government support. In early March, the University Grants Committee indicated that by 2007-08 less than 20% of CityU's current AD places will continue to be government-funded. The President said he has proposed to the UGC that more such places should be retained but the University is still awaiting a final answer. He lamented that CityU, as a public institution, cannot live out a role that the Government does not approve of and support, strategically and financially. "Without full government backing, we don't have any other method to salvage the cut programmes," Professor Chang explained. The University does not have the adequate resources, re-appropriated from other faculties, to share the loss of funding for the College. To help the College out, colleagues in the College, he suggested, should shift the mode of thinking and operation. To the extent that is feasible, the University will help in the shift. Alternatively, they may contemplate other forms of employment of continue their careers. The idea of setting up a community college to house the self-financed associate degree programmes is still undergoing a vigorous planning and scrutiny process. "We plan and plan----in fact we have gone through several stages of planning," said Professor Chang.

The second certainty relates to the existing taught master's degree programmes, which will also be replaced, in phases, by "truly self-financing operations" that will yield not only bigger educational value to the community but increased revenue to the University. To tackle challenges on this front, the University has to realign, albeit on a minor scale, the lineup of its staff and resources in order to attain growth in certain areas. "We have to look into the possibility of offering more self-financing courses at master's level in selected disciplines and strengthen the doctoral programme in the areas in which we truly excel," said the President. CityU will have to undergo a "painful but critical self-review" of its relative academic strengths vis-a-vis our counterparts in . His views echo those in the Sutherland Report that local universities should build on existing academic areas of proven strength, when moving toward greater "role differentiation."

Apart from the phasing out of government-funded associate degree and master's programmes, the University has to brace itself against at least one extra blow: substantial budget cuts in the roll-over year 2004-05 and new triennium 2005-08. It, Professor Chang said, will have no choice but in due course to opt for further money-saving measures, primarily targeted at the burgeoning payroll and related staff costs, which now take up more than 70% of CityU's recurrent expenses. Professor Chang said these measures include, but are certainly not limited to, voluntary and management-induced retirements, "delinking" staff salary from that of the civil service, and cutting staff remuneration and benefits. No definite start dates for these austerity policies have been decided on, though, but these will certainly be placed on the menu if the Government cuts are deep and wide in scope. "Except for a small number of staff who may not fit in the new picture," he said, "I want to minimize the impact of losing the associate degrees on the rest of the University." This is in stark contrast to recent announcements from one of our sister institutions, whose president warned of laying off as many as 500 to 900 staff.

The Management Board, the President said, has in the last two to three months worked particularly hard at scenario analysis and planning. Yet without the benefit of the exact tally from UGC, the Board is unable to paint a clear picture for our colleagues. "That some staff believe it is a Management Board responsibility to make announcements with certainty at a time of uncertainty, to me, is a paradox in life," said Professor Chang. "Board members are academics and administrators who are planning on the University's behalf, based on the best information available. But in this case such information is still dribbling through to us slowly."

Difficult times, the President said, call for "a certain esprit-de-corps and a certain self-sacrifice and compromise from individuals" for the sake of common good. If everyone insists on maximizing his/her own interest or the interest of his/her department and office, the resultant picture could be chaos and failure throughout the Institution. As President, Professor Chang said he will strive to foster among staff "a sense of cohesion and a willingness to take some results that are less than totally satisfying" in order to see the Institution succeed as a whole. However, he stressed that he is in full sympathy with the plight of our colleagues and will continue to argue our case and monitor the situation closely. The President ended the interview by quoting General Charles de Gaulle's famous phrase: "I understand you" ("Je vous comprends").