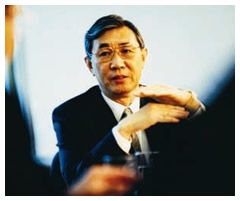 In late February, a flurry of media reports on the government allocations for local universities in 2005-08 sent waves of jitters and dismay across local university campuses. Added to staff concern was a government proposal, now tabled before the Legislative Council, urging universities to"delink" their pay scales from those of the civil service, effective 1 July. Amid a cacophonic din of"gloom-and-doom"news, Linkage went to talk to the President, Professor H K Chang, and inevitably the topic was drawn to the one big question lurking in everybody's mind. How bad is the cut going to be?

On the very day Professor Chang spoke to Linkage, on 26 February, the University had yet to be informed of the"exact magnitude" of the proposed cut. Some simple tally, perhaps, can offer a clue to the order of things to come. First, the University Grants Committee (UGC) has made clear its intention to phase out, over four years, government support for associate and taught master's degrees. And given the resources we have expended on these programmes in the past few years, the President said that he wouldn't be surprised at all"if the 2005-08 budget were to be slashed by 20% or more," compared with that of the previous triennium. That estimation, Professor Chang cautioned, might even turn out to be on the low side, if 's fiscal situation continues to show no strong sign of recovery. Over the past few months, he has argued repeatedly in public that it has taken 15 years for the universities in to achieve what they have so far. The government, no matter how severe the budget situation is, should avoid decisions that will inflict"permanent and irreparable" damage on the higher education sector. Yet, on our part, we must remain vigilant and prepared for the scenarios that are likely to emerge."I hope the best will come but I'd rather assume the worst will," said Professor Chang."Now is the time to call on the pragmatism in all of us."

Fact is CityU, like other local universities, has accumulated a certain amount of reserves in the past six years. This means, Professor Chang explained, we have not been under-provided all along. The challenge now is"to quickly learn to live within our means" to be astute in planning our future activities, pragmatic and efficient in carrying out our plans."We can no longer afford to solve any problem or tackle new developments by adding on more activities or extra organizational layers to the existing structure," he said."We cannot, for example, say that a certain new programme is good and thus decide to go for it, while forgetting a whole lot of others may require critical review." In order to sustain growth in some areas, we have to prune others, he said."This is what pragmatism requires and what harsh reality dictates."

To achieve a soft landing on the other side of the budget crisis, the University has two options: to cut staff costs, or to slash every other kind of expense instead. The latter path, of course, is unrealistic, as the University cannot, without appearing irresponsible and self-serving, stop paying its utilities bills or buying new laboratory equipment for the next couple of years."It would be ludicrous for a university to operate in that mode," said Professor Chang,"The government and the general public will not tolerate us taking that route, especially the latter group whose sympathy with us has worn thin this time." So, anyone with a healthy dose of pragmatism will have no choice but go for cutting staff costs, which gobble up more than 70% of the University's recurrent expenditure.

Again, there are two broad approaches in tackling this unenviable task: a general,"across-the-board" cut, or targeted trims in selective areas. In the former scenario, everyone's salary would be cut by 20% if, say, the government budget for the University is whittled down by 20%. Even if this decision appears egalitarian and easier to make over the short-term, the broad sweep in effect penalizes good performers along with the poor ones and would have a lasting effect on the University community. So, Professor Chang said,"I think any self-preserving community would opt for the second, more pragmatic, approach" in pruning some areas while allowing others to grow. The University's senior management, the President stressed, has yet to reach a decision and he will not rule out the option of resorting to a combination of both approaches.

To many staff, salary cuts (and possible cuts in other benefits as well), whether they are the result of a budget crunch or"delinking" are all the same. In essence they are not; only the unfortunate timing makes them appear the same ."I'd like to draw a line between salary cut (due to budgetary reasons) one the one hand, and a delinking of the salary structure on the other," said Professor Chang, adding that CityU has never asked for such a delinking. The government and the UGC have always been in the driver's seat on this issue, heeding"complaints" from one or two heads of universities a few years ago that the rigid pay system prevented them from recruiting and retaining quality staff when competing with US universities.

CityU's current pay mechanism is derived from the civil service. Under such a linked protocol, staff members normally move one point up their salary scales every year until they reach the top. Each increment jacks up the University's expenditure by 3%, according to Professor Chang. In other words, we need a 12% increase in budget over four years just to hold the same number of staff in place within their scales alone, not to mention the extra money needed to cater for promotions and new recruits. On the books, the University could use the merit-based system to withhold increases from those whose performance is less than satisfactory. In reality, most staff simply march on to the next salary point year after year."My share of pragmatism tells me," said Professor Chang,"that even without the proposed budget cut, we have to review our overall compensation structure" in order to find better ways to reward good performers and open up career paths for our staff.

Lately, the UGC has promised that the allocation of block grants to universities will be"delink-neutral? assuring that no institution will be penalized whether or not it accepts the proposal. In principle, however, delinking can give us some flexibility to reward the performers and help the University rein in its growing expenditure."I don't see why either idealists or pragmatists would object to this," said Professor Chang. What staff members tend to fear is that, as happens in other parts of the world, the whole question of delinking emerges only when the government budget position is weak, leading to a substantive salary cut for those affected."I'm sympathetic to that kind of feeling. We might find ourselves in that scenario, too, but we are holding the government to task on its words," he said. Meanwhile, staff have to accept a six-percent cut in salary over the next two years, following the recent agreement between the government and the civil servants, because, as of today, our salaries links have not yet been effectively severed. Staff, moreover, should brace themselves that annual pay increases as an entitlement will no longer be guaranteed. Nor can it be promised that only new staff will be affected by the policy change.

The practical side of Professor Chang mandates him to start pondering the various scenarios and appropriate responses."I can't sit here and not make any moves," he said. But, ironically, he cannot do much either until"a clearer picture emerges" when the University is told the exact budget allocations. Nor can the President announce his strategy until he has a chance to consult the other universities or to co-ordinate with his counterparts."Thus, it won't be next week (early March) that I'll come out with a public announcement."

Professor Chang said he understands well that nobody wants a cut in salary, or to accept a diminishment in the quality of life that they have grown to expect."But, in the final analysis, a university is not a mutual welfare body for staff," he said."Our primary goal is to educate our students and to develop their minds." Education is perhaps the noblest vocation people can pursue, and in these endeavours, university education is the perfect embodiment of idealism in humankind—to assimilate, accumulate and impart knowledge from generation to generation. A university is steeped in idealism and aspirations, but our feet must be planted on solid earth when we have to deal with real problems. We should never lose sight of our vision in times of difficulties, nor should we become"dreamy-eyed" and unrealistic in overcoming the real hurdles before us. Professor Chang concluded:"This is the time pragmatism and realism should blend."