"I used to think the best people were all attracted to the east of the country before I visited China's west," said Ms Cherry Lum, a Senior Counsellor who supervised the Career Centre's recent Chongqing Internship Programme. "When I took the students to Chongqing , however, I was surprised to discover the wealth of talent there. Just about everyone we dealt with was very impressive."

CityU's Career Centre, part of the Student Development Services, arranged the three-week internship programme with the Chongqing Zongshen Group to expose the students to private enterprise in China's west. Seventeen students participated in the programme, which ran from 23 December 2002 to 11 January 2003. The host company, Zongshen Group, is a major motorcycle manufacturer in China, producing, among others things, about 1.5 million motor cycles a year. With about 18,000 employees, it is one of the country's fastest growing private enterprises. "China's private enterprises have come a long way in only two decades. They have made many Chinese people rich and have attracted interest worldwide. "Our students definitedly benefit from studying such a dynamic business environment," said Mr Rock Tam , another Senior Counsellor at the Centre.

Recognizing the growing importance of the west, the Centre had been hoping to take students to explore that part of China for years. Chongqing is an important industrial city in the west. In 1997, Chongqing, which used to be the second major city in Sichuan Province, was chosen by the Central Government to be China's fourth municipality, following Beijing, Tianjin and Shanghai. About 90% of China's motorcycles are produced there. 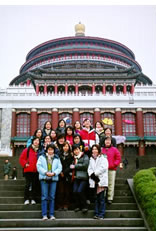 For the first time, the Internship Programme took place over the winter vacation. Chongqing is one of the four "furnaces" in China , with temperature sometimes reaching more than 40 1/4 Celsius in summer. And the food is extraordinarily spicy. "We were concerned that our students wouldn't adapt to it well. That's why we arranged it for the winter rather than the summer, even though we had less time," said Mr Tam, the mastermind of the Centre's Mainland Internship Programme.

The Centre's Chongqing programme was the result of efforts that go back to the mid-1990s. As the link between Hong Kong and the mainland grew, the Centre began to explore various opportunities for students in 1994. It designed a variety of activities, including workshops, tours, forums and training camps, in the hope of acquainting students with business on the mainland. Because of the lack of resources, however, such activities were limited to nearby cities in South China, mainly Guangzhou, Dongguan and Shenzhen. It was not until September 1999 that the Centre could finally take students to the northern part of China. Thanks to the sponsorship of CityU's Whole Person Development Programme, 80 students took the Centre's Business Explorer programme to Shanghai for eight days.

It was not at all easy to find such a variety and number of companies willing to participate in the internship programme. "At the beginning, we knew nobody," Ms Lum recalled."OWhat we did, whenever we could, was pass on our business cards." The first time she went to Beijing, Ms Lum remembers giving away 200 cards in one night. When she ran out of cards, her colleague in Hong Kong had to courier her more.

Another hurdle for the Centre was the reality that it's difficult for students to make real contributions to the host companies in the short time they have in China . Perhaps this was what has stopped other Hong Kong universities from developing their own mainland internship programmes. Instead, they hire agents to organize and manage the programmes. "By doing it ourselves," Mr Tam said, "we have a much better understanding of such out-of-classroom learning experiences. This allows us to be of better help to our students." 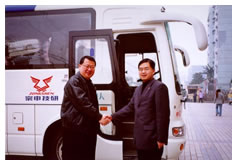 Thanks to the contacts the counsellors had made in the corporate world prior to joining CityU, they succeeded in placing 49 students in 16 companies and organizations in both Beijing and Shanghai in the summer of 2001. "Our contacts were usually built through friends" friends or former colleagues" friends. The more friends we make, the easier our job is," explained Mr Tam, a former YMCA social worker and executive at IBM.

However, the Centre owes its success to more than contacts. A number of its counsellors are frequently invited to the mainland to conduct training workshops for companies and government organizations. This has helped them expand their network on the mainland, according to Mr Tam. In fact, the Chongqing internship was first discussed with a contact made during a workshop conducted in Beijing for the city's education bureau in 2001.

Last year was a particularly successful one for the Centre and its mainland internship programme. Among other things, it succeeded in expanding its internship partners to include NG's."There's a need to expose our students to non-profit-making organizations," Mr Tam said. Through he YMCA, the Centre made connections with several NG's in Beijing and, last summer, secured places for students at two of them, including the Special Olympics China. This organization works closely with the China Disabled Persons" Federation, which is chaired by Mr Deng Pufang, the eldest son of the late Chinese leader Mr Deng Xiaoping , to assist the Beijing Municipal Government in the preparations for the 2008 Special Olympics.

A totally unexpected result of last year's Beijing trip was the coverage it received by China's official TV network, CCTV 2. Since the Chinese government no longer arranges work for graduates," said Mr Tam, it puts a lot of pressure on the universities. They all need to learn how to help students find a job. The programme, broadcast in August 2002 in two parts, was about 20 minutes long.

OThe career counselling carried out at Hong Kong's universities is very market-oriented," said Ms Yu Shufen of the Career Service Centre at the Beijing University of Technology. "They know very well what companies want in graduates. That's exactly what we lack."

Adjusting expectations on both sides 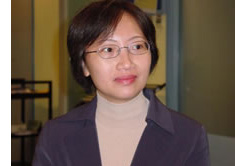 The Chongqing Internship Programme, the Centre's latest success, demanded a lot from the students. "Because of the short term break, they had to leave for Sichuan immediately after their examinations and were thrown into work the next day after arriving," said Ms Lum. The students chosen for the trip were generally more mature, and most of them had some experience in working as an intern. Three workshops were held before the trip. Discussions were conducted most evenings during their stay at Chongqing to help the students make the most out of the internship. The key was in adjusting their expectations.

Most of the students expected their employers to teach them, to tell them what to do, as they expect from their teachers, said Ms Lum. Of course, that was not going to happen. Ms Lum had to make sure they understood that employers are not teachers. "The first and the most important thing I wanted them to learn was to take the initiative, not only to find work to do but to convince their employers to give them work." 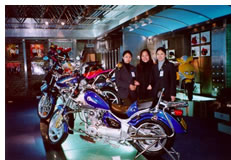 On the other hand, she also had to adjust the employers" expectations of the students. "Some of the mainland companies had never had the experience of working with Hong Kong students. They didn't even know that Hong Kong students can't type using mainland computers because their Chinese input methods differ from those in Hong Kong. So I always urge my students to learn Pinyin before they go."

Evening discussions were also effective in helping the students cope with the new environment. The Centre was very lucky to have two volunteer facilitators join the Chongqing trip: Mr Ringo Cheung, a retired IBM executive, and Mr David Fong, a Hong Kong-based lawyer. The discussions often lasted late into the night. "It was very tiring. But it was worth it," said Ms Lum, who is proud of the way the students impressed their Zongshen supervisors.

"was really rewarding to see that, after years of searching and hard work, we have been able to build good connections with mainland companies and organizations. It's all about helping our students learn," Mr Tam added.

The Career Centre has organized four mainland intership programmes since 2000, with about 120 students participating. In addition, the Centre has also helped around 200 CityU students take part the Hong Kong Jockey Club's Summer Internship Programme for Tertiary Students in Hong Kong. The selected students worked in the UK , the US , Taiwan and in the mainland during the three-year-old programme.