Mutual understanding is essential to promote economic cooperation between countries and to resolve trade disputes in a globalized economy. Building up bilateral rapport between member states is a fundamental working principle of WTO. In this context, CityU's School of Law received a rare guest from high office and a WTO diplomat.

Ambassador Yolande Bike, Gabon's permanent representative to WTO, was greeted on 15 January by Professor Peter Malanczuk, Chair Professor of the School of Law and Director of the WTO Law and Dispute Resolution (WTODR) Centre. Mr C Raj Kumar and Mr Zhao Yun, and Mr Kim Van der Borght, respectively Lecturers and Academic Visitor of the School, also joined the meeting. "It is a constructive and thought-provoking experience to meet Professor Malanczuk and other staff members of City University's School of Law. I'm sure there are a lot of possibilities for mutual cooperation between Hong Kong / China and Africa in future," said Ambassador Bike. 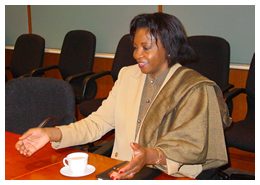 CityU's WTODR Center is the first university-based centre in the region dedicated to the study of the interaction amongst globalization, legal development and international dispute resolution mechanisms. "Ambassador Bike is very interested in the work of our Centre -- in particular our research focus on the links between trade and the environment, which falls exactly within her scope of work in the WTO," said Professor Malanczuk. Both parties have identified a number of areas for future collaboration.

Professor Malanczuk has been maintaining good and wide networks with Africa. Both he and Ambassador Bike are keen to contribute their expertise and capacities to enhance the relations of China and Africa. "We look forward to be able to run short-term training courses on international trade and investment, and commercial arbitration, for government officials and practitioners in African as well as Asian countries." Indeed, Professor Malanczuk has been invited to serve as a consultant and speaker to an international conference on Sino-African relationship to be held this November in Ethiopia.

At the invitation of the Hong Kong government, Ambassador Bike, the most experienced ambassador from Africa, came to learn about Hong Kong's political, economic, trade and social developments. Ambassador Bike is currently chairperson of the Special Session of the Committee on Trade and Environment at the WTO. She served as coordinator of the Africa, Caribbean and Pacific Group and was active in preparing for the WTO Doha Ministerial Conference last year.