About 300 guests, staff and students turned out on 16 January for the naming ceremony of the first residential block of 's Student Hostels Project. The block was named the Jockey Club Humanity Hall, in honour of the generous contribution made by the Hong Kong Jockey Club Charities Trust towards the development of the student residences. The ceremony was officiated by CityU Council Chairman Mr Norman Leung, Mr David Eldon, Steward of the Hong Kong Jockey Club, and CityU President Professor H K Chang.

In his welcoming speech, Mr Leung said the memories of his life in halls at the and the friendships begun there some decades ago have proved long-lasting. "Life in halls of residence contributes much to the academic life of a university," he said. "Facilities alone don't create a great university; it's the vitality of campus life that makes a university great." Mr Leung, who has been associated with the University since its early days in a commercial building in Mongkok, said he was delighted that CityU now had its own student hostels.

Speaking on behalf of the Jockey Club, Mr Eldon said hostel life could sharpen students' social and communication skills, nurture their leadership qualities and encourage greater participation in academic and community development. He reiterated the Club's commitment to higher education in , and in particular, to fostering and enriching campus life for students by supporting all the phases of CityU's student hostels project. 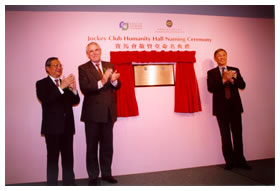 In his vote of thanks, Professor Chang thanked the Jockey Club for its generosity and its staunch support to higher education. "There is no better time than today to invest in higher education and no better symbol to mark such an investment than building student hostels," the President said. "The University is grateful to the Club not only for providing the funding support but also for having the wisdom to name the building in celebration of the University's spirit of humanity." He said the student hostels project is a true reflection of CityU's student-centred philosophy of education: to enhance the quality of student life and enable students to reap the full benefits from their educational experience. 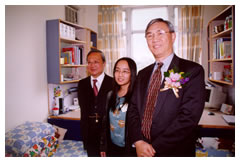 The Jockey Club Humanity Hall has 19 single and 161 double rooms, providing 341 bed spaces for the students. It is well equipped, with facilities such as a function room, common room and laundries. Each room has a telephone and is networked for accessing the Internet. Three residential buildings of Phase I of the project, including the Jockey Club Humanity Hall, have been completed and occupied, providing 806 bed places for students. Phase I also includes a multi-function hall, which serves as the focal point of hall activities.

The Student Hostels Project marks a significant milestone in the University's history. The entire project will provide some 2,800 bed spaces for CityU students. While the government has provided funding for 75% of the construction costs of the first two phases and part of the third phase of the project, the Jockey Club has contributed, through its charities trust, some HK$125 million, or 15% of the total cost, towards all three phases of the project. A staunch supporter of higher education, the Club also gave generous support to the construction of the , which has provided accommodation for overseas students and scholars since 1997.