2003 has finally arrived, whether we welcomed and noticed it or not. As the new year begins, what does the future hold for CityU and its staff? What principles should guide us through the tumultuous times ahead? Linkage, as usual, went to talk to the President, Professor H K Chang, to find out what's on his mind, a few days before he took off on vacation.

And as usual, the President began with an intellectual trajectory into the past, trying to provide us some historical perspective to help us better understand the present. Two hundred years ago, in 1803, Professor Chang said, John Dalton, a British scientist, came up with the atomic theory, in an attempt to explain how and why elements would combine with one another in fixed ratios or sometimes in multiples of those ratios. One hundred years later, in 1903, the indomitable Wright brothers, took their FlyerNthe first powered, heavier-than-air machineNoff the ground at Kitty Hawk in North Carolina , US. For the first time in human history, man flew in the air for 59 seconds over a stretch of 260 metres.

The world has never been the same again, so to speak. And never before has change come at such blinding speed. Now we are in the throes of nanoscience and nanotechnology in the microcosmic world, said the President, and mankind has sent probes to the edge of solar system, millions of kilometres away, hoping to unravel the mysteries of the universe. The advent of science and technology in the past 100 years or so has resulted in unprecedented advances in society, both in our economic well-being and in the way we conduct our daily lives. "That science and technology are the driving force behind momentous change is a well-accepted notion," said Professor Chang, "and no university students today can afford to be illiterate in science." The developments in the 21st century make it essential that future generations know how science and technology can improve human understanding of nature and put it to good use. Yet we also recognize that such knowledge alone, however fundamental and essential it has become, is not a panacea for all the problems humans face. Sometimes, the massive buildup of knowledge and quantum leap in our material well-being leave us yearning for answers to questions about the meaning of life, the value of interpersonal relationship and humanity's common destiny. Science and the humanities have to work hand in hand for a better world, and mastery of knowledge and precepts in both domains are a must for anyone entrusted with the future. "What is important in the 21st century," said Professor Chang, "is for human beings to move from a state of self-being to a state of self-conscious." His numerous visits to universities in the mainland and overseas have reinforced his conviction that CityU's emphasis on a whole-person development philosophy in education, which started in 1996 when he assumed the post of president, is on the right track and should, indeed, be reinforced. And this is precisely the raison dOetre behind the new strategic plan 2003D08, Meeting the Challenge of Change, recently approved by the Council. "A seamless marriage of the values of science and the humanities in our education will help set us apart from other institutions and will be remembered as our unique contribution to university education in Hong Kong and the region," he explained. 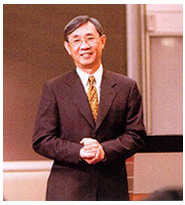 This brought the President to his second point: 's future role and development. "No matter which road is going to take," he continued, referring to the recent discussions about the role and future positioning of in the context of an emerging , "we cannot and should not forsake the legacy of our 150 years of history nor forget our unique geographical location." In his view, which he aired in these pages in October and November 2002, has to serve as a bridge to the world on behalf of a massive hinterland of 1.3 billion people. Only by capitalizing on our strengths in bilingual skills (English and Chinese), bicultural sensitivities (of the West and East) and international networks can Hong Kong, and our students, set themselves apart from what China's mainland and its university students have to offer to the world. Outstanding technical or subject knowledge, as good as they are, are not the extra advantage or value we or our students can provide to the outside world, Professor Chang believes, in the face of increasing competition from mainland graduates.

OI used to ask, how can our graduates justify receiving a monthly salary as much as four times the going rate on the mainland, when their subject knowledge of, say, construction engineering or accounting, is often as good as, but apparently not much better than, that of their counterparts?" said Professor Chang. Thus, we should be concerned more with our students" long-term future rather than be obsessed with if they receive enough training in, say, a specific technical area. "Cross-cultural communication skills and creative and critical thinking skills are key to their success," he said, "and this is a point I must repeat time after time." In this context, Professor Chang asked teaching staff to come up with more out-of-discipline (OOD) courses that broaden our students" horizons and "loosen their grip on students." "OOD courses are not the means to jack up student contact hours with their home departments," he said, "nor should these be used as decoys to protect the departments" resources. What is the purpose of education: to prepare our students for the future or to safeguard a department's (or division's) budget?" he asked pointedly.

Lastly, Professor Chang said that over the years CityU has faced, and continues to face, many challenges. These include, among others, to find ways to help the community understand our position and strengths better, to seek a higher institutional reputation that is commensurate with our real worth, and to continue to deliver quality education and research with less public support. In meeting the challenge of change and uncertainty, we must, like all effective organizations do, move forward in unison, "with one heart and one mind". "Internal debates are part of a healthy process for us to arrive at a common understanding, to adopt a common platform for action," he said, yet endless debates and bickering will lead to "dissipation of energy". History has shown that being trapped in a quagmire of internal rivalries to the neglect of imminent external challenges will lead to demise. Professor Chang said, "This is a lesson for every one of us in 2003," Nwhich is, in the Chinese lunar calendar, the year of the ram, an icon for harmony, kindred spirit and cooperation.