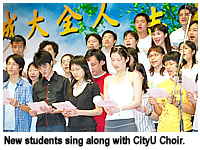 "Fantastic!" "An absolute delight!" Audiences were carried away by the beauty of Fall Tunes, recently organized by the Cultural and Sports Committee.

A performance of verbal arts, Fall Tunes was a joint effort by CityU staff, students, winners of the Hong Kong Schools Speech Festival, and the Putonghua Langsongshe.

In addition to prose recitation, story telling and female choirs, the production, on 16 and 17 November, featured a performance of "The Phoenix", by Mr Wang Jishi and Ms Fan Zhifong, from the Tianjin Renmin Arts Theatre, and Dr Ruth Yee, Associate Director of Student Development Services. "The " is a classical Chinese drama about the tragic love story of Lu You, a poet in the South Song dynasty, and his cousin Tang Wan. The Tianjin Renmin Arts Theatre has performed it more than 200 times.

"The cooperation on stage between and provided a valuable opportunity to promote verbal arts in a different language and form," said Dr Yee.

The audience said that they were impressed with the actors, the costumes and the lighting. "The performance enabled me not only to understand more about ci (poetry written to certain patterns with strict rhyme schemes, in fixed numbers of lines and words) but also to reflect on the value of love," said Ms Emily Lui, a CityU BBA student.

The Putonghua recitation of "Nian Nu Jiao" and "Reminiscing Chibi" by a group of CityU students also received loud applause. The team's coach, Ms Chuen Yuk-li, Lecturer in the Division of Language Studies, commended the dedication and hard work of the team members, especially the year one students who joined the team just three months ago.

"We learned a lot from organizing the performance: what is professional, cooperation—and, most important of all, how to perform with a 'heart'", said Ms Yuen Kwan-wai, one of the Putonghua recitation team members and a year two student in the Division of Language Studies.

CityU actively promotes cultural activities. "The Voices of Spring last year was very successful in arousing people's interest in performing arts. It gave us the impetus to stage Fall Tunes this year," said Dr Yee. "We hope to promote cultural activities to CityU staff and students and to the community at large."

Organizing the performances also helps boost a sense of belonging and fosters cooperation between staff and students, said Dr Yee. Cultural activities not only stimulate students' interest in the performing arts but also help nurture their spiritual, social and aesthetic development.