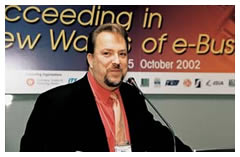 The second key panel session in the ICEC 2002 was held on 24 October. Moderator Dr Louis Ma, Associate Head of CityU's Department of Information Systems, invited five panellists to discuss emerging e-business applications. The main reason for choosing the topic, Dr Ma said, was to try to identify high value-added applications for in particular, where there is still a relatively low adoption of e-business. To this end, the government has pushed for some value-added areas appropriate to , including financial services, tourism, logistics, and production and professional services. 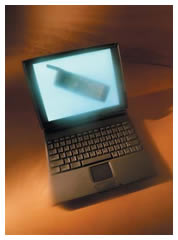 Mr Steve Beason, Executive Director, IT, at the Hong Kong Jockey Club (HKJC), said the Club's vision is to be a world leader in the provision of horse racing, sporting and betting entertainment, and 's premier charity and community benefactor. Currently, the HKJC's annual donations total HK$1 billion and it contributes 10% of 's total tax revenue.

In a move from the traditional operator, cash-based mode of betting, more revenue is now being brought into the HKJC through account-based, wireless, or e-channels, Mr Beason said. "It's a huge shift from a direct cash list type of transaction services and it also costs one-fifth of our operator-based, cash-based transactions, so there are big savings for us through these direct channels."

Mobile betting devices are the area in which Mr Beason believes the HKJC will excel-they are currently selling four times faster than other channels. The Club uses a proprietary SIM card, of which there are 40,000 bringing in about HK$6 million a week. Mobile digital certificates (m-certs) are the way of the future, Mr Beason believes. "I hope that comes along, that the m-cert is embedded in the majority of handsets. I do believe you're going to use your phone as your wallet."

Another channel he sees as being very successful is the PDA that can be used as a phone. For their Internet channel the HKJC uses PKID-certs (public-key infrastructure for e-certificates, the equivalent of identity cards in the online world), provided by Hong Kong Post. "The typical PC e-cert has a hard time running on some phones but is capable of being run on some of the newer processors for pocket PDAs," Mr Beason said.

He aims to supply information, such as racing odds, morning track work and data from past races, to all the different devices-PCs, televisions, and mobile phones. And in a bid to make the area more interesting, the Club intends to track jockeys as they race around the course with GPS-like technology. "It will be like a video game and will personalize your interaction with the sport," Mr Beason said. "We're also looking at wireless interactive terminals, so you'll have all the live video and audio information to allow you to make bets-and you can order food and drink to the table you're sitting at."

The whole idea of making the different channels the HKJC is developing more interactive and engaging is to ensure they are more popular than "sitting in front of your TV and calling up an operator on the phone," Mr Beason said. "Before I can say that we don't need any more operators, I need to provide a very content-rich environment for people who want to use mobile devices, and that's why we're looking at virtualization." 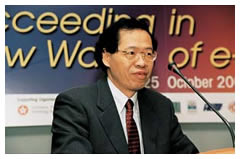 "The air cargo industry is one of the fastest-and one of the few-growing industries in these recession times in Hong Kong," Professor Y V Hui from CityU's Department of Management Sciences, told the panel. This year, expects to be ranked second in the world in air cargo throughput. But although has excellent facilities and is a world class service provider, the industry is facing fierce competition from , Shenzhen and . One of the reasons for this is that 's harbour list contains 288 forwarders, of which 80% can be classified as SMEs.

"Current industry trends are to interrelate e-commerce and e-business in the transport industry through online business processes and consolidation. Industry is looking for an efficient, reliable and cost-saving way to facilitate logistic services as well as business processes," Professor Hui said. Big international companies can deal with these trends by setting up their own servers, but 's SMEs are facing changes they can't adapt to, constrained as they are by limited resources and lack of knowledge and capability. "Even big local companies don't have an integrated information platform comparable to that of international companies."

The solution, Professor Hui believes, is an information infrastructure for the air cargo industry-a logistics e-community network, through which partners would be connected via the Internet. The operating platforms would include a management platform for e-business, a market platform for e-commerce, and an information exchange platform to enable the operation of the e-commerce and e-business activities. For air cargo logistics, the e-community platform serves as a hub.

"However, the platform is more than a hub," Professor Hui explained. "It also allows forwarders as well as other users to manage multiple supply chains from one or more than one shipment and even partnering with other agents." While such a platform would be an asset for the logistics industry, technical, managerial and economic issues remain to be resolved. On the technical side, the management platform has to be integrated with the market and information platforms. And the design of the information exchange platform must include characteristics of functionality and interoperability for standards, and the protocol must satisfy the e-business requirements of the management platform. "Other more controversial issues include identifying the stakeholders and who will own the community, and what the risks and costs will be," Professor Hui said.

CityU's Centre of Cyber Logistics is participating in the government e-logistics project to develop an information exchange platform for the logistics industry. He added, "But the development of an industry-wide e-commerce and e-business platform on top of this platform will be more challenging." 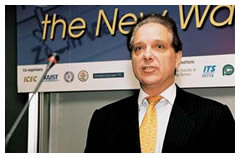 HSBC has 32 million customers worldwide, 190,000 shareholders, has 7,000 offices in 81 countries, and was named 2002 Global Bank of the Year by the Banker magazine. "Our IT philosophy is that we're pretty much a control-our-own-destiny organization," said Mr Malcolm Gray, Senior Executive, IT, HSBC. "With 14,000 IT staff around the world and 8,000 developers, we tend to build group solutions that are standardized. However, things are getting more complicated, so we develop and have meetings with third parties rather more than we did in the past."

HSBC's First Direct call centre bank in the , which has an excellent reputation in terms of its call centres, is an example of the growing popularity of Internet banking. Since it was introduced around two years ago, more than 50% of First Direct's customers are now Internet banking users and "these are people who are very used to having a conversation with their bank and who are happy to move towards Internet banking."

Fulfilment is a problem faced by all banks moving towards online banking, Mr Gray believes. "Everybody knows that once you have Internet banking or any other Net service, it's like having a searchlight on the back office." The question of fulfilment from the both the customer service side and the IT side also remains to be resolved. Traditionally, these groups have tended not to be part of a seamless process, where one part holds up the other. Rather, IT tends to measure IT and customer services measure themselves in different ways, so the current aim is to have some alignment between the two. "The difficulty from the IT side is that customer services is one of the systems that is furthest away from your control, and a lot of variables are involved. It's a matter of complications as well as complexity," he said.

How travellers perceive travel agencies in the era of the Internet was the topic of the address by Dr Rob Law, Associate Professor in the and Tourism Management at the . "The Internet is an effective electronic channel that allows tourism service and product suppliers to sell their products to anyone at any time, anywhere, without barriers. What travellers want are high quality services, information and products and also value for money. Both tourism researchers and practitioners have emphasized the importance of the Internet in this regard," Mr Law said.

The popularity of tourism and travel sites on the Internet, researchers in the field has led to a debate on the future role of travel agencies. In view of the importance to of the travel and tourism industry, Dr Law addressed the question from the travellers' point of view, by conducting the 2001 International Visitor Survey. Some 780 non-transit international visitors from seven major tourism generating markets-the Chinese mainland, Taiwan, Singapore, Malaysia, the US, Australia and Western Europe. Of the 460 qualified respondents (that is, experienced users of Web travel sites), 158 had purchased online. The biggest purchasers were from and those with the lowest propensity to purchase online were visitors from mainland .

Mobile life, the hype and the first hard facts

"Mobile commerce is not just the extension of e-commerce to wireless platforms, it's changing to a business paradigm," said Professor Christer Carlsson, from the Institute for Advanced Management Systems Research/Mobile Commerce Research Centre at . Wireless platforms offer new opportunities not present in e-commerce; they give new freedoms, new choices and values to customers. "If it can transform the way you pursue your everyday activities, life and business, then e-commerce has made its mark: you'll have products and services that actually make a difference." 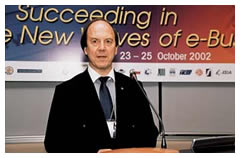 Looking at the m-commerce paradigm from three different perspectives-customer, producer and management-Professor Carlsson said that from the consumer's point of view, there are three drivers: flexibility, value adding, and mobile technology itself as a basis. "For example, although the literature says you don't need a camera phone, there is lots of demand for the Nokia 7650 camera phone. The unusual thing is that when consumers get this phone they invent new ways of using this technology and share their innovations on the Nokia Website." From the producer's perspective, modularity, layers and bundling are the driving factors. And as far as management is concerned, value/cost ratio, production, marketing, and innovation make for good business models. "It's surprising to see that business-to-business is progressing so fast, as on the e-commerce side, business-to-employee is a distinct second. Peer-to-peer is more attractive in the mobile environment than in the traditional e-commerce environment," he said. However, a number of things promoted as killer applications in m-commerce didn't happen and never will, he believes. The much hyped 3G (third generation telecommunication) licences are an example, where extremely rapid penetration and growth processes were predicted, and "ridiculous" sums of money were spent. "But after the hype wave, you see the reality." Operators launching 3G in 2002 are taking a huge risk, and without killer applications in place, 3G could follow in the footsteps of WAP, Professor Carlsson said. Moreover, users are unlikely to buy the first range of 3G handsets if only broadband voice calls and Internet browsing are offered, and it remains unclear how operators will market 3G as the next generation in mobile technology.

"It's not enough to build m-commerce beachheads on technology and hope that the technology will generate the value," Professor Carlsson concluded. "The real value of m-commerce will come from what it creates in terms of changing the limits of the possible in the structures of everyday life."