On 25 November, seven days after the Independent Committee (IC) submitted a report on the recent events in the School of Law (SLW), the Council, decided unanimously to accept the IC's major findings and recommendations, but added a few caveats.

Professor McConville was reprimanded for his "misconduct". The IC finds him "wrong" for "not [completing] the Re-appointment Forms or provide comment by way of critical evaluation" on staff seeking contract renewals. He was also criticized for not providing any reason to the staff concerned on why their contracts were not recommended for renewal by the School Staff Committee. The Council instructs, Mr Leung stressed, Professor McConville to pay heed to, and implement, the IC findings and recommendations when discharging his duties.

The other two SLW staff were rebuked for spreading "groundless allegations" based merely on hearsay, speculation and "co-incidences". The Council finds such behaviour "irresponsible and reprehensible", as it caused great damage to the reputation of the SLW and the University. Disciplinary action may follow.

Unity and cooperation are the only way forward in the SLW. Mr Leung calls on all SLW academic staff to resolve their differences and work together to provide a quality legal education for our students. "The interests of the students are paramount," said Mr Leung. "We have been pained to see the conflict and turmoil in the SLW over the past few years." The Council and the University believe that cooperation and understanding are necessary "in the overall interest of the University, the entire staff and the student community", he said.

Mr Leung further pledged that the University management, led by the President and vice-presidents, will follow up on the Report's findings and recommendations. But he also warned staff to refrain from spreading groundless allegations, or they could face disciplinary action and even dismissal in serious cases.

The President also called upon all staff to work in harmony and cooperation. Failure to do so will mean that the University is not putting its time and efforts to the most constructive uses; this will certainly harm the interest of our students and the future of the University in the long term. 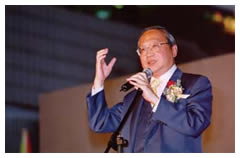 The IC conducted open hearings for two weeks between 19 and 31 August, with 31 witnesses invited to present oral evidence and five others presenting written submissions, before it adjourned for two-months to deliberate and rule on its findings.

On 19 November, the IC published its full report, both in English and Chinese, each some 300 pages long. The report made a number of findings on the veracity of allegations arising from the recent events at the SLW. It also investigated the procedural "flaws" and issues relating to staff appraisal and evaluation, particularly during the contract renewal process.