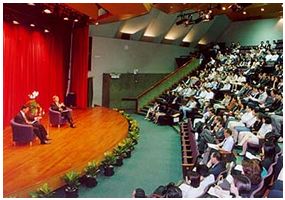 President H K Chang led more than 300 staff in an exchange of ideas on the future of CityU at the 10th University Development Forum on 23 October, saying it was time to embrace the University's new strategic five-year plan, "Meeting the Challenge of Change".

Professor Chang launched the 90-minute Forum with a 45-minute overview of the strategic plan, a final draft of which is being prepared for the meeting of the University Council on 25 November. It is expected that the Council will endorse the plan, and that the University can open a new period in its work.

In his talk, the President stressed the importance of quality teaching, the improvement of the student selection process, more streamlined management and a better image-building programme in the new five-year plan. Drawing on remarks he made on the strategic plan in the most recent issue of Linkage, Professor Chang said that while the University had scored spectacular achievements over its short 18-year history, there was much room for improvement. 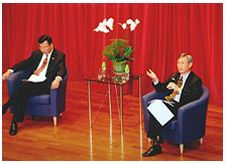 Looking ahead over the next five years, he said that funding would be one of the key challenges facing the University, in light of 's new economic reality. Professor Chang then outlined CityU's importance in relation to 's general role as a bridge, both real and symbolic, between the Chinese mainland and the world. Professor Chang was joined on the Wei Hing Theatre stage by Professor Y S Wong, Vice-President for Institutional Advancement, who kicked off the question-and-answer session with a couple of questions of his own, including one on how the University could enhance the quality of its graduates. 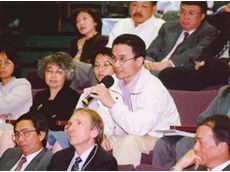 "I don't have a wonder drug or a magic formula," said Professor Chang. "But I can tell you that better teachers produce better graduates… we need to pay more attention to the selection process and how we educate our students."

Several questions from the floor centred on the University's image problem. Staff noted that there appeared to be a gap between the achievements of the University and CityU's reputation in the greater community. The President said he recognized that such a discrepancy existed and confirmed that he was dedicated to bridging that gap. 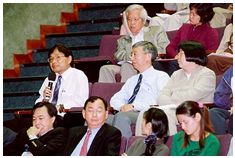 "I don't think I can change the perception of the entire community on my own," said Professor Chang. "It requires an effort by everyone." The President once again stressed the importance of quality teaching. This would produce quality graduates, he explained, who would go out into the world and slowly build up CityU's reputation. "Why is and so respected?" he asked. "Because of the consistent quality of their graduates and because of the quality of their scholars and staff."

The development forum ended with the President asking everyone to familiarize themselves with the strategic plan, available online at www.cityu.edu.hk/op/stafflan/strategic_plan03_08.pdf , and to lend their support to the important new strategy.