A new semester amid new challenges 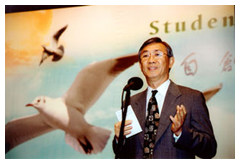 The sweltering summer weather is largely gone by the end of August and a new semester beckons as cohorts of freshmen savour their first glimpse of CityU life during the student orientations. In mid-August, Linkage spoke to the President to find out what he thinks are the important issues and challenges facing the University as it rolls into the new academic year.

After giving the question some thought, Professor H K Chang said that from his vantage point he sees four pertinent issues. Top of list, and probably capturing the attention of many staff (as well as the media), is the open hearing conducted by the Independent Committee on Review of Recent Events in the School of Law, which will last from 19 to 31 August. He said the University had used all its internal mechanisms to attempt to resolve the incident, up to the Council acceptance, in April 2002, of the findings of the Appeals Committee headed by Professor Edmond Ko. However, to allay any lingering doubts and concerns in the court of public opinion about the University's position, as reflected through the Legislative Council (Legco), the President recommended to the Council in April that an independent committee be set up. The Council subsequently approved the constitution of the committee in June 2002, with Legco member the Honourable Audrey Eu as chairman. "Of course, I fully support the work and function of the Independent Committee, logistically and in other areas," said Professor Chang. "If the Committee finds any shortcomings in our administration and management system, we'll be happy to rectify them and improve the system. On the other hand, we'll be exonerated from any lingering accusations of wrongdoing if the Committee finds the University has acted properly all along."

Even though the School of Law hearing is attracting a lot of attention, it is far from being the only blip on the President's mental radar. "As the chief academic officer of this institution," he explained, "my number one priority has been to create and ensure an environment conducive to students and professors to engage in learning and scholarship." And this duty is never felt more acutely than at the beginning of an academic year when more than 4,500 new students march through our doors and a wide spectrum of classes and extra-curricular activities begin. "The Independent Committee has an important job to do and their findings might have an impact on the development of the University," said Professor Chang, "but I believe that our staff will agree they have a bigger and more fundamental job to do in continuing to provide quality education for our students. I want to make sure that environment is in place at the start of semester A."

Looking slightly ahead, the University has entered the era of its second five-year strategic plan, following 1997-2002, the original plan. Soon the University will unveil its new blueprint for the future. The President hopes that staff will take a close look at the plan, which was drawn up after extensive consultation at the grassroots level over the past year. The plan can be seen as a rallying call for the University community to achieve in the next five years what CityU aspires to in its vision. "I encourage staff to read it through when it is available so that they can see the big picture of where the University is going."

Finally, Professor Chang said he has told the Management Board and other colleagues that he will soon seek the Council's support in restructuring the University's senior management. This is necessary, he said, in order to help us better adapt to the changing environment envisioned in the new strategic plan and the recent Sutherland report on higher education. No time frame has been mentioned but it is possible that there will be a new line-up of senior management responsibilities as early as before Christmas.

Recent accusations by some media (all proven to be based on misconstrued facts and hearsay) might have made us feel upset or angry. The truth is, the President said, the University has achieved a lot and staff contributions have been a cornerstone of our success. "Staff have lit up thousand points of light along our path of growth," he said. He hopes staff enthusiasm will continue to grow despite some minor setbacks. As the inscription on a painting given to him by a friend reads, "Even though we may find ourselves in the middle of heavy rain and strong wind, our hearts still hold out for the sun to shine through soon."