"It's so fresh, clean and tidy here!" Zhang Yin said at the first sight of his dormitory room. His roommate, Ye Qing, was particularly delighted at the view of . They were among the 25 students, recruited from the Universities of Jiaotong and Fudan, who became the first residents in the Student Hostel. These mainland students, recruited on scholarships from the Hong Kong Jockey Club and private donors, are enrolled in three-year bachelor degree programmes at CityU. 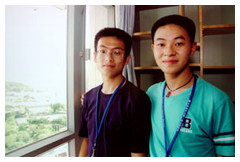 They were given a jumpstart to life at CityU with an array of orientation activities organized by the Student Development Services (SDS). "Meet Your Buddies" was a major feature of the orientation programme. Some 20 senior students have been recruited to act as buddies, mentors and advisers to the mainland newcomers. The buddies are either students recruited to CityU last year, exchange students or members of the Putonghua Society. They shared with the newcomers their experience of studying at CityU; led 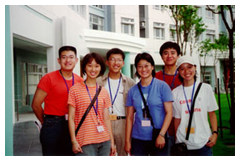 them on tours of the campus, the neighborhood, as well as various scenic spots in ; and even provided assistance in matters such as applying for identity cards at the Immigration Department and opening bank accounts.

"We hope that these buddies, with similar backgrounds and similar experiences of studying away from home, will provide practical advice, as well as emotional support to the newcomers," said Ms Esther Lee, SDS Executive Offer in charge of the orientation programme. Like all other local freshmen, the

mainland newcomers were briefed on the University's credit unit system and electronic communication system; encouraged to join the Orientation Camp organized by the Student Union; and were treated to welcome lunches and meeting sessions with faculty heads.